We have two stories (with photos) to share from fans who wanted to thank #7:

Sami Wilhite makes another appearance on Ben’s site – Sami’s first appearance was on July 23, 2012 when we shared her photo with Ben for our training camp info post. She was back again in December of 2013 for a Steeler Nation post, and more recently, you may remember the birthday shout-out we did for her in April of this year (which included a special email from Ben when he saw it on his website). 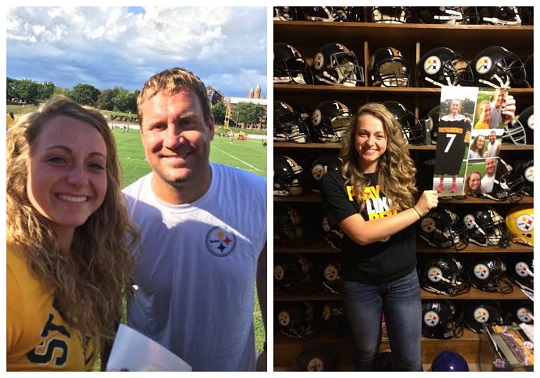 Well, she is back with a fun story and some more great photos to share with us:

“The picture I sent you of me and Ben was from training camp in August. I was able to get his attention with the picture collage that you made for me and I was able to get him to sign it. Ben saw it and I said, ‘Thank you for the birthday email,’ and he said, ‘That was you?!’ and he signed the collage I had enlarged. I then asked him for his arm band and he actually gave it to me.

My dad and I made his Findlay helmet and I was able to get Ben to sign that too.

But the coolest thing was getting my collage signed that you made me, and also the Miami helmet we made!” — Sami


You can check out those helmets here, as well as the family’s entire Steelers collection!

12-year old Brennen House is a life-long Steelers fan from Hagerstown, Indiana. His mom wanted to share this story with Ben and Steeler Nation: 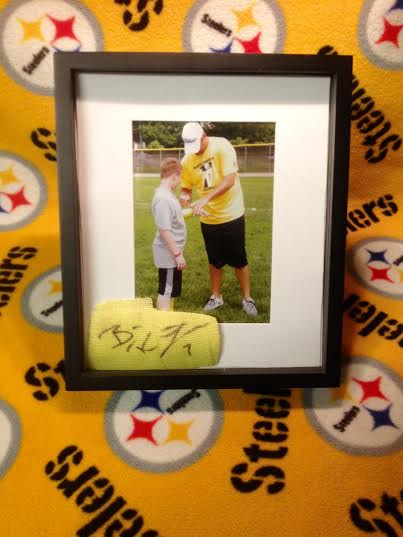 “For three years, Brennen and his brother, Carter, have attended Ben’s ProCamps.

Their Grandparents, George and Terri Cecere of La Grange, Kentucky (also Steelers fans) have happily taken the boys on these trips to allow them these awesome experiences.

Brennen broke his arm in the beginning of May, but knew he would be getting out of his long-arm cast and into the short-arm right before it was time to head to camp. He chose a yellow cast and refused to let anyone sign it in the hopes that maybe, just maybe, Ben would.

While Brennen was sitting with his team on the first morning of camp, waiting to break off into their drills, Ben walked past Brennen and asked, ‘How are you going to catch a pass with your arm like that?’, to which Brennen responded, ‘I’ll find a way.’ While Carter’s team was playing football, Carter told Ben that the kid in the cast was his brother and he had a Sharpie in his sock, which made Ben laugh. After Brennen’s team played their football game, Ben approached Brennen and asked, ‘Do you still have that Sharpie in your sock?’.

Ben then proceeded to make Brennen’s year – he signed his cast!

Over the weekend the boys’ grandparents were at our home for a visit and they brought Brennen a shadow box containing the picture of Ben signing Brennen’s cast and the piece of cast – a unique and memorable treasure.

Brennen not only caught all passes Ben threw to him, but ran one in for a touchdown. Such a wonderful memory for my boy!” — Joanna Dill


You can see more photos shared with us from Ben’s ProCamps football camp here.

*Thank you for sharing this with us, Joanna!