Home/News/Big Ben sighting (and signing) in Arizona
Previous Next

…at the Phoenix Open Annexus Pro Am this week!

Ben not only got into the swing of things with Jerome Bettis, Bruce Arians, Larry Fitzgerald, Emmitt Smith, Marcus Allen, Urban Meyer, Randy Johnson and Ken Griffey, Jr., but also took time out to mix & mingle with the fans: 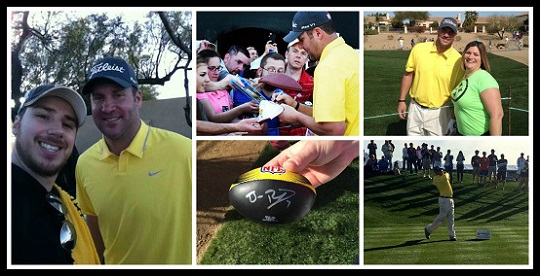 James Shimkus @james_shimkus
Ben signing and taking pics with fans at every hole. Taking his time and talking to everyone. #steelers @_BigBen7

James, who is a life-long Steelers fan and a long-time follower of Ben’s website, also wanted to add –

“It was absolutely amazing! Such a class act!”


Lindsay Czarniak @lindsayczarniak
I’ll never complain about starting my day on a golf course. Ben Roethlisberger off to a respectable start.

You can see the full-size photos (and a few more) here!