Just in case you missed…

Home/News/Just in case you missed…
Previous Next

Just in case you missed…

the NFL Films special feature on The Ben Roethlisberger Foundation last month, they have made the show available online!


“I was on a vacation down in South Carolina and had a gentleman walk up to me and shake my hand, and tell me he was a K9 officer and that he had received one of our dogs, and it really meant a lot to him. I was really touched by that. Then he said, ‘I live in Baltimore’, and he’s a Ravens fan! So for a Ravens fan to say that to a Steeler was kind of….it was pretty special!” — Ben, from his interview on the show that first aired on December 4th. 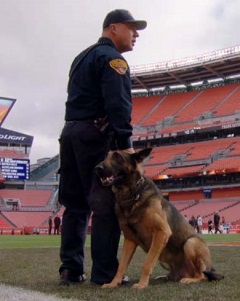 The segment, entitled, “NFL Films Presents: Big Ben Loves Dogs”, explores Ben’s foundation from it’s inception in 2006 to the present, including interviews with Ben, and his father Ken, who oversees the foundation with the help of Jessica Duffaut at The Giving Back Fund.

NFL Films producer John Weiss also takes us back to the tragic story of Pittsburgh Police K9 Rocco, who was killed in the line of duty one year ago this month, and how Ben and his foundation stepped forward to give Rocco’s partner, Officer Lerza, a new K9, which he named, “Benny”. Included in the segment is a touching interview with Officer Lerza on the loss of his partner and how deeply it affected him.

As with any NFL Film, there are also plenty of great football highlights as well.

“As a fellow dog lover and with family in the police departments, I commend Ben for all he does to help ! Amazing job Ben – So proud to be part of Steelers Nation!!! — Terri Gow Benedict


“My department just received a Police K9 from Ben. I am honored to be his handler and trainer. We can’t thank you enough!!!!” — Officer Chris Aversa, Scotch Plains, NJ Police Department

“We were blessed to receive a dog from this foundation in my home town. What a great thing to do. Thanks Ben!” — Jennifer Petersen Justus


You can watch the full segment here.

Would you like to donate to The Ben Roethlisberger Foundation? You can do so here!