From the Weirton Daily Times today: 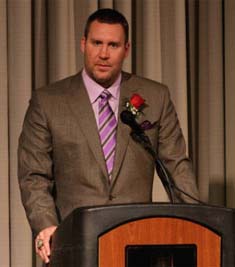 If Lou Holtz Hall of Fame supporters thought this year’s banquet tickets sold out early, just wait until next year.

The Hall of Fame announced Monday that guest speaker for their 2014 fund-raising event is Ben Roethlisberger, quarterback of the Pittsburgh Steelers.

The dinner will take place on Monday, June 16, 2014 at St. Florian Hall in Wintersville, Ohio.

“In an effort to handle what we expect will be a huge interest here in the heart of the Steeler Nation, we’ve taken a couple of unprecedented steps,” Hall of Fame director Robin Webster said in a press release. “We have begun taking ‘pre-orders’ for tickets, which will go on sale Jan. 16, 2014. So you can guarantee the availability of your ticket by calling to get on that list, giving us your name and a number where you can be reached.”

Additionally, Webster said, the Hall of Fame has made special arrangements with the venue to be able to seat 650 for the 2014 banquet, which will be served buffet style.

Plans are also under way to “live feed” the activity at the speaker’s podium onto eight wall-mounted flat-screen televisions, so those seated all around the room will have a close-up view of the guest speaker, as well as inductees.

The 2013 event saw the highest ticket sales in the hall’s 15-year history, with more than 530. Unfortunately, dozens interested in seeing the induction and hearing guest speaker Ohio State football coach Urban Meyer were turned away in the weeks just prior to the event, because it had sold out well in advance.

“We’re making the announcement for next year’s event months earlier than usual in the hopes that we can accommodate ticket sales for all of our loyal supporters as well as those drawn to this rare opportunity to see and hear Roethlisberger at an off-the-field appearance,” Webster said.

Tickets are $110, which covers admission, the meal, commemorative gifts and a chance at prize drawings held during the event. Of that cost, $50 is tax deductible.


To pre-order tickets, find out how your business can sponsor the event, or for general information, call 330-386-5443 and ask for Robin Webster or Rosemary Mackall, Director of Development.

You can read more about the Lou Holtz Hall of Fame here.