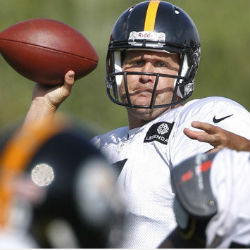 Pittsburgh Steelers camp had a county fair feel to it Friday night, and it wasn’t just because of the country band or the fireworks.

Ben Roethlisberger and the rest of the quarterbacks stuck around for an impromptu competition to test their throwing accuracy.

The targets were tall gray “buckets” — two large trash barrels stacked on each other — and the object was to land footballs in them. Participants got one point for hitting a bucket, two points for hitting the rim, and three points for sinking a shot. The buckets were placed at various distances to simulate different throws.

Tied with reserve quarterback John Parker Wilson at 11 points each, Roethlisberger — who hadn’t connected with a three-point throw to that point — won with a surgical strike that plunked into the bucket. He smiled, pumped his fist, and sauntered off the field.

“That’s him,” offensive coordinator Todd Haley said. “Ben finds a way to win, no matter what it is.”


You can read more from Mr. Farmer’s column here.