“The mobile quarterback is the difference maker”

Home/News/“The mobile quarterback is the difference maker”
Previous Next

“The mobile quarterback is the difference maker”

This is one of those articles that somehow got lost in all the excitement of Super Bowl week, but it’s still a good read one month later! 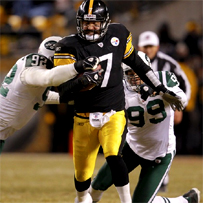 Neither Ben Roethlisberger nor Aaron Rodgers was voted to this year’s Pro Bowl, but there’s a good argument they’ve been the NFL’s best two quarterbacks down the home stretch of this season.

Both have many of the qualities teams look for at that position, but what separates them from almost all the other elite quarterbacks in the league is their ability to scramble and make plays on the move.

Among the top quarterbacks this season, they’re more athletic and mobile than Tom Brady, Peyton Manning, Drew Brees, Philip Rivers and Matt Ryan. Only Philadelphia’s Michael Vick was more mobile, but by the end of the season, he’d proven to be not nearly as good as Roethlisberger and Rodgers from the pocket.

Roethlisberger and Rodgers are the two quarterbacks left standing in part because of their ability to scramble and turn potential sacks or throw-aways into first downs and big gainers.

“I’d say (Roethlisberger is) one tough man,” an NFL scout said last week. “He’s big, he’s hard to bring down, you hit him, you think you have him wrapped up. He’s very similar to (former Minnesota quarterback Daunte) Culpepper in his heyday with the Vikings — you tackle the guy, you think you’ve got him and you bounce off him. You have to gang tackle the damn quarterback.

“The Jets game (in the AFC championship), they kept letting him break containment, and that’s where he was making all the plays. That’s a problem. Rodgers gives you the same. That’s where the mobile quarterback is the difference-maker…”


You can read the rest here (go ahead, it’s the off-season!).


*Thanks to Mike Hammond for the link! 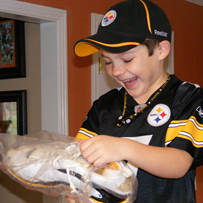 Garrett Cagle celebrated his 7th birthday on February 6th. He had a Steelers-themed birthday party and wore his favorite #7 jersey! Garrett’s birthday was also posted under the Happy Birthday Wishes list (in the column on the right). He was our February winner of the game-used autographed Nike cleat, worn and signed by Ben himself!

His mother Tammy kept the news a secret from him until the package arrived on Monday so that he would be surprised! Boy, was he surprised! He informed his mom upon receiving the cleat that “this is the best day of my life!”. He already has plans to take his new piece of memorabilia to school for “Show and Tell”.


You can see all three photos of Garrett with his cleat right here!

“I’m so proud of what my brother’s done, all that he’s accomplished and not just in sports but, you know, who he’s become as a person and who I know him as, you know, my big brother. So, I couldn’t be more proud of him or more proud to be his sister.” — Carlee Roethlisberger, from an interview/article that appeared on Fox Sports SouthWest this afternoon.