Coach T: No Ben on Sunday against Browns

Home/News/Coach T: No Ben on Sunday against Browns
Previous Next

Coach T: No Ben on Sunday against Browns

“There’s one bye available in this single-elimination tournament. We’re not going to be that team (with the bye). We made that bed, and so we’re prepared to lay in it. That’s the most significant variable for us, and so with that being said, given an opportunity to airmail a player or two to the postseason, we will. Ben will not be playing this week. We’ll turn toward Mason Rudolph and our young quarterback positional group and give those guys an opportunity.” — Coach Tomlin, during his Tuesday press conference. 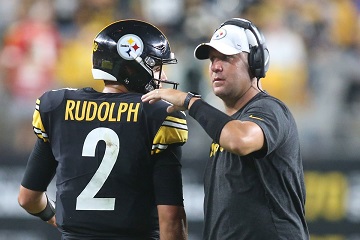 Administratively, his options are limited.

It cannot be treated like a preseason game, because he won’t have between 80 to 90 players in uniform on the sideline. He can’t rest all of his starters plus his significant backups, because with 48 players at most available for the game, the numbers simply do not work. And so Coach Mike Tomlin will not treat Sunday’s regular season finale in Cleveland against the Browns as a de facto bye week because he cannot, even if he wanted to.

The Steelers already had clinched a spot in the playoffs, and then with last Sunday’s victory over the Indianapolis Colts they clinched the AFC North Division title. Buffalo clinches the No. 2 seed with a win over Miami or a loss by the Steelers. The Steelers can do no worse than enter the playoffs as the No. 3 seed, but they could get to No. 2 by beating the Browns if the Dolphins beat the Bills.

During a year in which homefield advantage has been watered down by COVID restrictions on large gatherings, the difference between a No. 2 seed and a No. 3 seed is close to insignificant. But there are other factors that will prevent Tomlin from manufacturing a Week 17 bye for his team.

“We’ll look potentially at resting some other guys in terms of making them inactive, but the number of those guys and who those guys are will be determined as we push through the week. Player availability dictates that,” said Tomlin.

“The only thing I’m willing to acknowledge at this point is that Ben will not play, and so we’ll formulate a plan with that understanding. All of the other variables in terms of who’s playing and who’s not, we’ll determine later in the week based on injury and health. Positional health, probably more importantly than anything else. There’s strength in numbers, and so I’d much rather preserve and protect players with a rotational mindset than to necessarily remove one particular player and expose the rest of the group to an abnormal number of snaps.”