Home/News/Congratulations to Big Ben!
Previous Next

Ben has won AFC Offensive Player of the Week honors for his performance against the Colts. 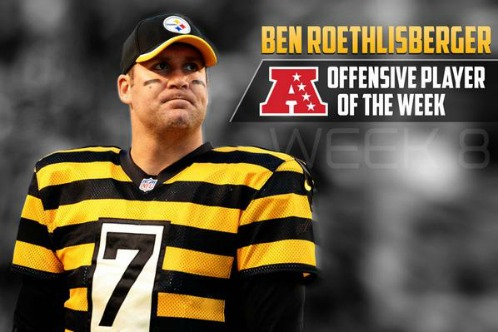 From Steelers.com this morning:

Steelers quarterback Ben Roethlisberger was named AFC Offensive Player of the Week for his performance versus the Indianapolis Colts in Week 8, the NFL announced today.

Roethlisberger put together one of the most impressive passing performances in NFL history as he completed 40-of-49 passes for 522 yards with six touchdowns and zero interceptions. He set new single-game franchise records in completions, passing yards and passing touchdowns en route to his 100th career win.

Roethlisberger’s 522 passing yards are tied for the fourth-most in league history, and he became the first player to record two 500-yard passing games as he threw for 503 yards versus the Green Bay Packers in 2009.

This marks the 10th time that Roethlisberger has been named AFC Offensive Player of the Week as he was honored in Week 11 of the 2013 season for his performance against the Detroit Lions.