Ben: “It was a fun win, but it’s Baltimore time”

Home/News/Ben: “It was a fun win, but it’s Baltimore time”
Previous Next

Ben: “It was a fun win, but it’s Baltimore time”

Wednesday – weighing in on this Sunday’s game against the Baltimore Ravens: 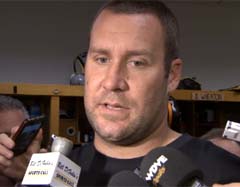 How do you top Sunday’s performance?

Just win. That was last Sunday and it’s in the rearview mirror. It was a fun win, but it’s Baltimore time and that’s what the focus point (was) straight to Monday morning.


Do you have to set aside your accomplishments from Sunday?

It’s not hard to do. I told you Monday morning I got up and I started changing diapers, cleaned up the kitchen (and started) moving on. Life goes on and that’s the realistic part of it. You have to put it behind you just as if you have a bad game. You have to be able to put it behind you and move on. There’s no point in sitting here dwelling on the past when we have a big one this week.


Can the performance last Sunday jumpstart something for this offense?

Well I hope so. There are things that we can take and learn from. We know there’s going to be new challenges this week with a great defense coming in here in Baltimore and the rivalry and primetime. It’s not going to be easy and I‘ve said I don’t care what our stats are as long as at the end of the game we have more points than the other team.


What’s the secret with Terrell Suggs sacking you 16 times?

(Laughing) He’s one of the best that plays the game and that’s rushing the passer and getting after it (and has) a high-motor. (I have) a lot of respect for him and we’ll just try to keep him off of me.


How much does Baltimore’s defense lose with Jimmy Smith being out?

Well they’ve been rotating some guys in. We’ve watched some of that Cincinnati game when he went out and seeing what they’re doing. It’s almost more difficult because we don’t know what they’re going to do. We don’t know if that means more zones, more pressures, more man-to-man (coverage) so we’ll just have to kind of prepare for everything.


How special is this week with the divisional game and Joe Greene’s jersey number retirement?

It’s a divisional game, it’s primetime, it’s at our place so it means a lot. And then you throw on top the Joe Greene aspect of it and wanting to do it for him. It’s pretty big.


What are your thoughts when you see one of the foundations of this organization being honored?

I think it’s awesome. I don’t want to say it’s about time because that sounds disrespectful because that’s not the way it’s meant. But when a guy of his magnitude, stature (and) what he’s done for the game of football and not just for this organization but the game of football he deserves to be immortalized in our stadium as well. He’s in the Hall of Fame and goes down as one of the greatest. I’m not sure what they’re going to do if they’re putting a banner up or what the deal is going to be. But everyone will know for all-time that he is immortalized in this stadium.


Was there something specific about Indianapolis’ defensive scheme that made it easier for your offense to execute?

No we just played good. We had a good plan, we executed and made plays.


What does it mean to be able to give back to your alma mater?

It means a lot. It means a lot to me and to my family to be able to do something that has my name, Coach Hoeppner’s name tied into it to help that program for all the good it did. It meant so much for the school and it meant so much to me. It’s a humbling honor that we can do that.


You can read more from Ben’s weekly interview here.