Congratulations to the Captains

Home/News/Congratulations to the Captains
Previous Next

Congratulations to the Captains 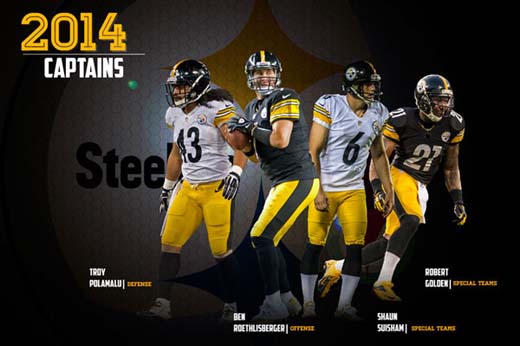 From Teresa Varley, at Steelers.com:

O Captain, My Captain: On Monday, before taking the field for their first regular season practice, Steelers’ players voted on team captains. And when the votes were counted, four players were selected to represent the team at the coin toss each week, but far beyond that.

Quarterback Ben Roethlisberger (offense), safety Troy Polamalu (defense) and kicker Shaun Suisham and safety Robert Golden (special teams), will all do the honors this year, with all but Roethlisberger first-time captains.

For Roethlisberger being a captain is old hat, this being the sixth time he was selected, but he appreciates it just as much now as he did the first time and will continue to operate the way he has.

“It’s an awesome honor that your teammates name you,” said Roethlisberger. “I’ve been blessed to be a captain the last couple of years. For the franchise and the storied tradition that it is here, it’s a great honor.”