Ben was ranked at Number 5!

Tom Brady, Peyton Manning, Drew Brees and Aaron Rodgers were ranked ahead of him.


You can see the rankings and ‘somewhat’ of an explanation here.

From the AFC North blog of James Walker on his rankings: 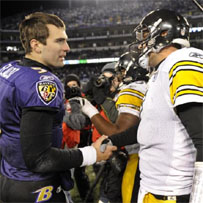 Two AFC North quarterbacks made the top 10. Ben Roethlisberger of the Pittsburgh Steelers was a no-brainer. He’s played in three Super Bowls, winning two. Roethlisberger finished No. 5 in the rankings behind Tom Brady, Peyton Manning, Drew Brees and Aaron Rodgers. I voted Roethlisberger fourth and Rodgers fifth, but you can make a strong case for both quarterbacks, who are at the top of their game.

Is Flacco a top-10 quarterback? He was tied for the final spot with Tony Romo of the Dallas Cowboys to make the cut. I’ve watched more Flacco games in person than anyone on the panel and he didn’t make my top 10. I had Flacco rated No. 12 on my ballot behind Romo (No. 10) and Matt Schaub (No. 11) of the Houston Texans.

In three seasons, Flacco has yet to beat the Steelers when Roethlisberger is at quarterback and needs to perform better in the postseason. Therefore, I cannot consider him elite.


You can read the rest of Mr. Walker’s opinion here. 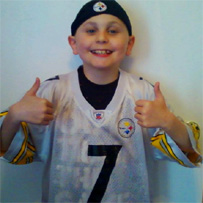 10-year old Brian Marsh is a fifth grader at Mauger School in Middlesex, New Jersey! He is a BIG Ben and Steelers fan and just like Ben, he not only likes to fish and hunt, but his favorite baseball team is the New York Yankees.

But Brian doesn’t just watch sports, he participates as well – he is both a football and a baseball player as well as a wrestler. Oh, and did I mention that Brian recently won the Citizen of the Year Award in his hometown?

Brian has been battling a pretty tough illness, but one thing we know about Brian – he is fighter….

But even the toughest fighters need support!  Let’s make sure Brian knows he has lots of prayers from Steeler Nation on his side to help him stay strong!