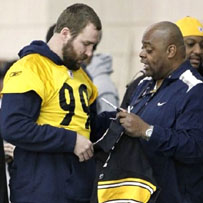 The Pittsburgh Steelers’ last practice in preparation for Super Bowl XLV at the Sam Baugh Indoor Practice Facility on the TCU campus was relaxed.

Family members surrounded the field as the players went over some situational plays during a casual walkthrough.

After the practice, family members gathered at midfield to greet their loved ones and take a team/family photo at midfield. Players also posed for individual photos as little kids ran around the field.

One person who watched practice was living his dream in 16-year-old Randy Stephens. The Wheeling, W.V., native received a gift from the Make-A-Wish Foundation to attend a Super Bowl. As an added bonus, he was allowed to watch Steelers practice on Saturday.

Hines Ward, Casey Hampton and Roethlisberger posed for pictures and signed a football for Stephens.

You can read more on the the team’s last practice today at Steelers.com here.

You can check out a few photos here.

You can watch a video interview with Ben from WPXI-Channel 11 here.


“I wish he could be here for me and with me and I know he’s got the best seat in the house, better than Jerry’s (Jones’) seat, but it still would be awesome to have him here because he means a lot to me.” — Ben talking about his beloved college coach Terry Hoeppner, from the article below. 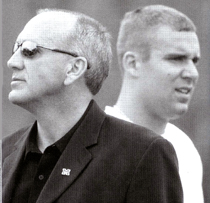 At a time when just mentioning Ben Roethlisberger was a lightning rod for criticism, those who knew him the longest and the best have stuck by him. It is those ties from Miami University that have gotten Roethlisberger through a year that has seen highs and lows.

Said Roethlisberger of the support from Miami: “It’s great. That’s family. That’s one of the reasons why I went there. I call Miami a family and my home.”

During Super Bowl week, Roethlisberger got emotional when talking about the late Terry Hoeppner. It was because of Hoeppner and promoting the family atmosphere that he went to Oxford and had a successful three seasons.

“You always hear that you are judged by the rings that you have and here is a guy with two rings. For him not to get the respect of other quarterbacks who have won multiple rings, I am not sure why that is. This is a guy who is just as tough as they come. A guy who makes plays at any moment in the game, always keeps his team in the game and always keeps plays alive.” — Green Bay Packers cornerback Charles Woodson, on the lack of respect for Ben in the media.

So, who are the celebrities that are picking the Steelers tomorrow? Here’s a sample from ESPN.com:

SHAQUILLE O’NEAL
Boston Celtics, Pittsburgh, 24-17. Big Ben is a friend of mine, has been for several years. He has regained his focus after the beginning of the season in turmoil.

ARNOLD PALMER
Golf Hall of Famer, Pittsburgh, 28-14. The Steelers have a very good team and a great bunch of guys. Terrific defense and lots of experience in big games.

PHYLLIS DILLER
Comedian, Pittsburgh, 21-17. One year I was playing outside of Pittsburgh. I couldn’t get to the job. The town went wild. They had to hold the show because the Steelers won. To me, they’re just always winners.