What to watch this weekend…

Home/News/What to watch this weekend…
Previous Next

What to watch this weekend…

BEFORE the Super Bowl! 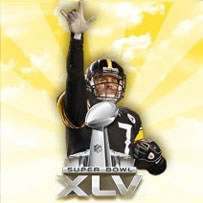 The experts offer their insight and analysis of the Steelers’ offense and how it will factor into the result of Super Bowl XLV.

Super Bowl XLV – Go inside the headset with former NFL head coaches Jim Mora and Brian Billick as they offer unique perspective and analysis of the coaching strategies and decisions going into Super Bowl XLV.

Ben sat down for two interviews earlier this week and both will be featured on Super Bowl Sunday:

– His interview with NFL Network‘s Michael Irvin – 9:00 AM on NFLN during the “NFL Game Day Morning” show.


And of course, there’s the Big Game –


What to read this weekend…

Ben’s sister Carlee is planning ahead for the Super Bowl…after she and her Oklahoma Sooners teammates host Iowa State in a need-to-win game on Saturday!

You can read the article/interview here.

You can check out what they had to say about their quarterback here.

You can read the story here.

Steelers fans of all ages got into the spirit of Super Bowl Sunday…on Friday:

Debbie Sigmund of Springdale usually can be found in the firm’s Pittsburgh Mills office. Yesterday, she celebrated Pittsburgh’s Number 7 by wearing a Big Ben jersey, bandage on her nose and one shoe larger than the other to demonstrate the toughness of Steelers quarterback Ben Roethlisberger. That’s how Roethlisberger played in several games this year.

“This is what Ben looked like all banged up,” she joked.

You can read about all the fun here.

The Washington Time-Herald‘s Steve Treu thinks the time to forgive Ben has come:

Roethlisberger may have been living, unjustly, with a scarlet “R” on his chest for 11 months. There are those (generally sanctimonious types) who still want that scar to be burned deeper, and they might be

doing so to an innocent man. Now that would be immoral as well.

So far, he’s done his part. Whatever lessons he has needed to learn, he seems to be learning.

Now it’s our turn. We should root for him to succeed at being a better person and support him in doing so – no matter what he does on the football field – just as we should root for anyone else involved in this incident to heal and grow. 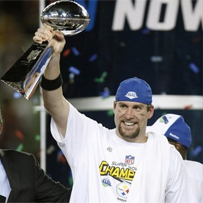 “Ben Roethlisberger has proven me wrong on one of my bedrock theories – that you can not be successful in the NFL if you don’t…as a fundamental of your success, deliver the ball from the pocket on time. That’s the job. I’ve always said that. If you want to play NFL quarterback and play at the highest level – that’s the job. Everything else, that’s fine, that’s window dressing, it helps, that’s great. That’s not the job.

“Ben? I don’t know that he really cares what’s called in the huddle. I don’t think it really makes [a difference] to him…he is uniquely talented to be able to stiff arm the nose tackle, he can do things, he just doesn’t go down. He likes that, and the whole offense has responded to it. But I don’t think that’s Championship football…except for him…but like he said earlier in the week, ‘I’m not a pretty player.’

“I think he should work on ‘being pretty’, but the way he does it? Here they are again, so I’m the idiot, he’s doing it. But not many human beings can do what he does so I guess that’s what makes him special.” — Former NFL quarterback Steve Young on ESPN’s Mike & Mike this morning, regarding his comments earlier this season that Ben doesn’t have what it takes to be a Championship quarterback because of his style of play.


“I got a sack on him about 5 or 6 years ago, but I had a time….he dragged me for about five more yards before I finally got him down. He doesn’t say anything, doesn’t talk [on the field]. Rodgers talks a lot, talks more than any other quarterback in the league, he’s a real cocky guy. — New York Giants defensive end Osi Umenyiora, on ESPN’s Scott Van Pelt Show answering a two-part question about tackling Ben and the demeanor of both Super Bowl XLV quarterbacks on the field.

To see the latest photos from this week and the last practice on Saturday, click here.