“I think it’s been a pretty solid 10 years. I mean, three Super Bowl appearances, two wins…I think most quarterbacks coming into the league would take that if you said that’s going to be part of your first 10 years. “Ben started and developed really quickly compared to what the old school used to be that it took a few years. Ben wound up starting his rookie year and really was pretty quick to being an effective quarterback.” — Steelers president Art Rooney II. 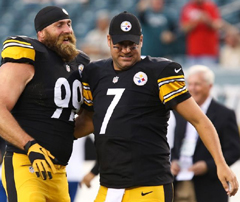 Brett Keisel has followed Ben Roethlisberger’s career as closely as anyone. The defensive end already had two years on the roster when the Steelers drafted their quarterback in 2004.

Keisel, who would become friends with Roethlisberger, recalled two first “wow” moments for him that opened his eyes to just what the Steelers had in their young quarterback.

The first came during a practice.

“I was just a couple years older than him, and I made a nice rush, and he just took off away from me,” Keisel said. “I said, ‘This big boy can run.’ ”

The other came in the fifth game of his rookie season — his third start — against Cleveland at home. The score was tied, 7-7, in the first quarter. The Steelers had second down on the Browns 6.

“The pocket got smashed,” Keisel said, giving the play-by-play 10 years later. “And he did a couple whoop-de-doos and spins and tiptoes and then just gave everything he had to get into the end zone, and then he had to dive between two guys coming to smash him.

There would be many more such moments over the next decade, and they hope more to come.