Home/News/“Steelers’ Roethlisberger has drive to win — now”
Previous Next 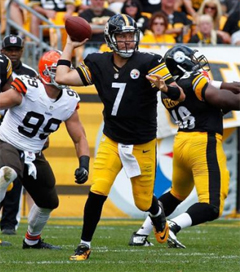 Ben Roethlisberger is a winner.

Actually, Ben Roethlisberger needs to win … at everything he does.

You name it — shuffleboard, golf, throwing a football into a garbage can, naming songs from the 1980s — and he will try his hardest to come out on top, and he usually does.

Maybe that’s the reason Roethlisberger has won at every level of football?

“He’s as competitive as they come,” Steelers offensive coordinator Todd Haley said. “That’s a trait that you love to see guys have. He is going to give it everything he has every time he takes the field.”

In high school, he led Findlay to a 10-2 record and the school’s first playoff win in his only year as a starter.

In college, he led Miami (Ohio) to a 27-11 record, including a MAC title his final year.

In the pros, he has won 105 career games in 10 seasons and two Super Bowl rings.

“I don’t like to lose at anything,” Roethlisberger said. “I don’t care what it is for. It is hard for me to lose at all. I have always been like that. Maybe I got it from my dad or my grandma, I don’t know. It is something that has always been in me.”

Ten quarterbacks have won a Super Bowl after age 32, but the majority of those came decades ago. Only one quarterback older than 32 (Brad Johnson in 2002) since the turn of the century has won a Super Bowl. Roethlisberger turned 32 in March.

“That doesn’t concern me, no, because I don’t feel like I am old,” Roethlisberger said. “I feel like I am entering my prime, and I feel like we have a good team that can do some good things. Nobody is going to put more pressure on me than me. For me, it is always pressure to win. I always put that pressure on me to be the best I can be and win football games.” 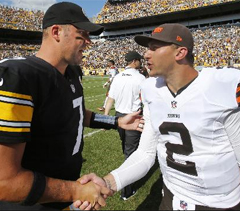 Fair or not, the onus of winning now is squarely on Roethlisberger’s shoulders. He accepts that as part of his job description.

“That’s part of the position, and you have to know that going in,” Roethlisberger said. “I’d much rather play poorly and win than play well and lose.”

Roethlisberger holds nearly every quarterback record for the Steelers to go along with two titles, but he still doesn’t get the national recognition that he deserves.

Quarterbacks such as Johnny Manziel, Robert Griffin III and others pop up on a yearly basis and are instantly praised, but Roethlisberger continues to be labeled as “just” a solid quarterback.

“I know what I have done and what I mean to this team. I have won two Super Bowls and been to three, and not too many people can say that,” Roethlisberger said. “Even some of the greats have never been or never won one. Maybe at the end of my career, people will look back and say that I was better than we gave him credit for.”