Today, Ben announced the eighth grant of the 2012-13 season from The Ben Roethlisberger Foundation at The Giving Back Fund. 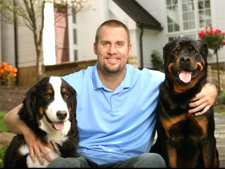 The Foundation will be distributing a grant to the Arlington Police Department where the Steelers will play the Cowboys this Sunday, December 16th.

The Arlington Police Department plans to use the funds for equipment and other needs for their K-9 unit which currently consists of three teams of handlers and dogs.

Arlington Interim Chief of Police, Will Johnson, said, “Last year, we lost a loyal K-9 who had served the Arlington community for six years. Vic, a Dutch Shepherd, had to be put to sleep due to inoperable cancer. Thanks to community support and donations, a new K-9 was purchased earlier this year and continues to be trained. The needs of maintaining a very active K-9 unit are substantial. The Arlington Police Department is grateful for the support that the Ben Roethlisberger Foundation has shown in providing this grant to help further our K-9 program.”

This marks the sixth season that The Ben Roethlisberger Foundation has distributed grants to K-9 units. The mission of the Foundation is to support K-9 units of police and fire departments throughout the United States with a particular emphasis on support for service dogs in Pittsburgh, PA and to support other charitable organizations, such as the Make-A-Wish Foundation.


You can get more information about Ben’s Foundation here!

You can also contact Stephanie Sandler at the The Giving Back Fund.