It’s another Fan Friday, but with a festive flair!

While Santa Claus is busy at the North Pole this time of year, Cassie Spruill is busy reppin’ her favorite team at the South Pole!! 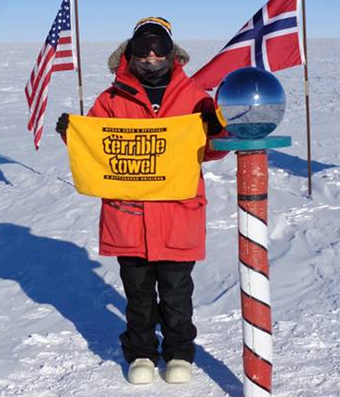 Cassie is a Nurse Practitioner currently in Antarctica at the South Pole Station. She is a big Steelers fan and made sure not to leave home for her new assignment without her Terrible Towel in tow (along with her “Troy Knows” t-shirt).

Major Susan Lukes, USMC, was standing on a tank in Afghanistan for the Salute to Our Troops post last month for Veterans Day.

She is back on the home page this month with her “Steelers home away from home” Christmas decorations at Camp Leatherneck. 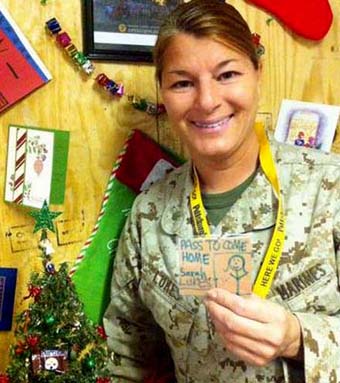 “Today I received my Christmas care package from my nine year old daughter, she knows I love my Pittsburgh Steelers…she sent this PASS TO COME HOME on a Pittsburgh Steelers lanyard! I will end my 7 month deployment on 10 Jan and thought this was so precious and wanted to pass it along for the BigBen7website for holiday cheers to our awesome team! Go Steelers!! Much love sent from Afghanistan.” — Sarah Lukes, Major, United States Marine Corp

A Snow Ben in Chattanooga, Tennessee! 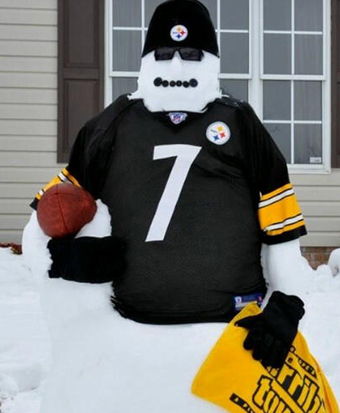 “I am just a die hard Steeler fan, have been my whole life, never miss a game. And I am a huge Ben supporter, so I had to make me a Big Ben snowman.” — Donnie Davidson

And what would a Fan Friday post be without a Lil’ Fan?

Meet Benjamin “Big Ben” Shank! Ben said this was the best year of his life because he is 7-years old (you know, the #7) and because he is also named after his favorite player. 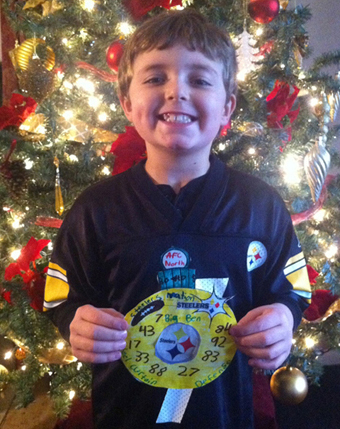 “Benjamin is holding his 2nd grade holiday project: a Christmas ornament designed with his favorite interests. Of course my Big Ben chose the Steelers, showcasing #7 and Big Ben at the top! He also has all NFL teams and their records memorized for the 2012-2013 season and has his playoff predictions ready (Steelers are his #1 choice!). Not bad for a 7-year old!” — Natalie Aikens, proud mom

We have five pages of photos of Steelers Christmas trees, wreaths, greeting cards, kids, pups and of course, the best fans in the world all right here.

We also have some awesome Lil’ Fans, a new Lil’ Teammate, some funny Steelers Pets, Vets, and more fan photos! Check ’em out this weekend!

24-year old Steelers fan Rob Shore of Charleston, South Carolina is battling Cystic Fibrosis and is in Pittsburgh awaiting approval for a double lung transplant at UPMC. Steeler Nation, please help us in sending positive thoughts and prayers Rob’s way to lift his spirits and keep him strong as he continues his fight!


7-year old Daniel Goicoechea de Jaramillo of Oakton, Virginia is “a HUGE Steelers fan” who is in desperate need of a kidney. He is now starting his 5th year of dialysis. He has had a rough go of it since birth with many medical issues to deal with for one so young. This little guy has a long road ahead and could sure use some prayers!