Today, Ben announced the fourth grant of the 2015-16 season from The Ben Roethlisberger Foundation at The Giving Back Fund.

The Foundation will be distributing a grant to the Shawnee Police Department just southwest of Kansas City where the Steelers will play the Chiefs on Sunday, October 25th.

“The addition of a new canine to our unit will greatly expand the capabilities of these officers and the services they provide our citizens. We sincerely appreciate the generosity of the Ben Roethlisberger Foundation in helping keep Shawnee a safe community. Being a native of Pittsburgh and a huge Steelers fan to this day, makes this grant award that much sweeter. With much gratitude to the Ben Roethlisberger Foundation, a very fortunate pup is soon going to join an award winning program here in Shawnee!” — Shawnee Chief of Police Rob Moser.

With this grant, the Shawnee Police Department will expand from two to three K-9s in their unit adding a dual purpose explosive team.

This marks the ninth season that Ben’s Foundation has distributed grants to K-9 units. The mission of the Foundation is to support K-9 units of police and fire departments throughout the United States, with a particular emphasis on support for service dogs in Pittsburgh, PA. Ben also supports Make-A-Wish. 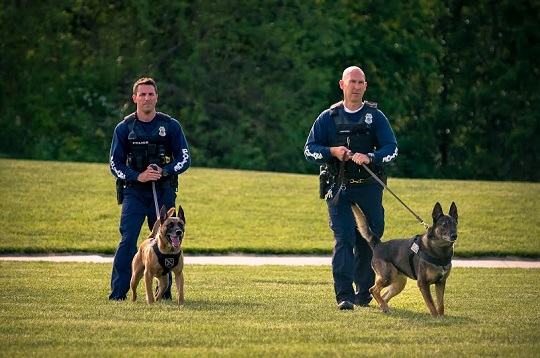 Shawnee K-9 Officer Shaun Arnold said, “It’s an honor accept this generous donation from the Ben Roethlisberger Foundation. I’m proud to call the City of Shawnee my home, and wake up every day with pride that I get to serve the citizens of the greater Kansas City area. I’ve been a K-9 handler for five years. It’s a position that I have always wanted to hold, dating back to the days I served in the United States Army. I’ve seen our unit grow from one to two K-9 teams within the last seven years. We knew we could serve the area better with a third K-9 team, however it is a difficult item to pass with the budget constraints every municipality faces. Words cannot express how thankful we are for the Ben Roethlisberger Foundation.”