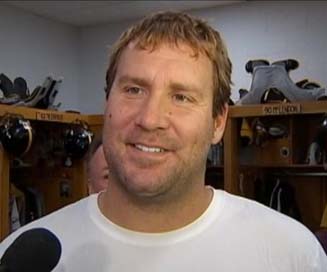 Ben Roethlisberger isn’t worried about the pain, he has played with pain before. The key factor for him, and what could be a decision-maker as to whether or not he plays this Sunday against the Kansas City Chiefs, is the stability of his knee.

“I can deal with pain,” said Roethlisberger. “Adrenaline helps with that a lot. The stability, we have a great training staff and doctors. We have about six different knee braces to try. John Norwig is going to tape it too. Today is going to be a trial and error type of thing. I have no idea what it is like to run, move, and get hit in the leg. I am not really sure yet.

“The pain will be there for a while. I can deal with pain.”

Roethlisberger suffered a sprained MCL against the St. Louis Rams on Sept. 27 and has missed the last three games. He said when the injury first happened, before he knew the severity of it, getting back this quick was hard to imagine.

“I knew the pain that I felt and I saw the look in the doctor’s eyes, so it was scary,” said Roethlisberger. “Once we got back, got the results the MRIs and talking to doc, it was encouraging.”

So encouraging that he worked in a limited role in practice last week, but he wants to take it to the next level this week. He said he isn’t certain how many reps he will get in practice, or what the final decision will be as to him playing this week as only time will tell if he will return to game action or not.

“That is not my call,” said Roethlisberger. “That is coach’s call. I am going to go out and practice and give it everything I have and let him make the decision.

“I am excited to get out there and do a little bit more than I have been doing last week.”


On what’s been the most physically challenging part of his rehab:

“Nothing too much. We haven’t done things that we know will hurt it. There is no point in testing those things. Right now it’s just about getting it strong.”

“He did way better than I did. I went into Baltimore and my head was spinning. I know Landry is a guy that above the shoulders especially, is very talented. Very smart football player. Knows his stuff. A guy that even I would have confidence being in the league 12 years going up to him saying what did you see there, what do you think. That is a confidence I think he showed on the field Sunday, is that he knows what he is doing.”


On if he returns what it’s like going against Chiefs linebackers Tamba Hali and Justin Houston:

“I have faith in my guys up front. You have to. Any time we go against anybody on defense, no matter who they are, whether they are premiere guys like that or a great defensive group that throws all kinds of blitzes at you, we have to go into the game with the approach that our guys are going to block them. That is the confidence I have in them.”


You can watch video of Ben’s interview today here.