Today, Ben announced the fifth grant of the 2012-13 season from The Ben Roethlisberger Foundation at The Giving Back Fund. 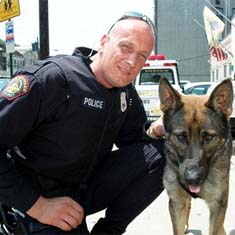 The Foundation will be distributing a grant to the Jersey City Police Department just outside of New York, NY as the Steelers prepare to play the Giants this Sunday, November 4th.

Today’s grant follows Hurricane Sandy’s destruction through New Jersey and much of the Northeast which left Jersey City crippled.

The Jersey City Police Department has been working in extreme overdrive since before Monday’s storm to help its citizens safely deal with the storm’s aftermath.


“This is why we do what we do. Providing dogs to first respondents so that they can respond in times like this is our main motivation. The citizens of Jersey City are fortunate to have such dedicated police and fire departments on hand and we are proud to assist in this small way.” –Ben

The Jersey City Police Department plans to use the funds to purchase much needed equipment for their K-9 unit service dogs including crates, ballistic vests, and combat harnesses among other gear for their 10 canines.

During the 2012-13 NFL season, The Ben Roethlisberger Foundation will be distributing grants to K-9 units of police and fire departments in the cities and surrounding communities of each regular season away game for the Steelers. The Foundation will also distribute several grants to the Pittsburgh area and will consider grants to any two non-NFL market cities in the United States if the Steelers make the playoffs.


You can learn more about Ben’s Foundation here.

We have been absolutely stunned and devastated to see all the pictures and stories of victims losing everything due to Hurricane Sandy. We have obtained a flatbed truck courtesy of P.I. and I. Motor Company– we are going to be doing a donation drive tomorrow November 2nd! The flatbed truck will be in our parking lot at 6 p.m.– we will be taking donations all night long!

If you bring a donation after 8pm, we will wave your cover charge. These victims need bottles of water, clothing, shoes, toiletries, non-perishable items. The truck is leaving first thing on Saturday Morning to deliver our donation to NJ and NY. Spread the word– let’s rally as a community and help everyone that has been affected by this disaster! — Dan Jergel