“Shout out” to Steelers fans in New Jersey

“Shout out” to Steelers fans in New Jersey

The city of Hoboken, New Jersey continues to suffer greatly after the devastation of Hurricane Sandy. Water from Sandy’s surge is still waist-deep in some areas, power continues to be out for many, and food is in short supply.

Amidst it all, folks are still finding a bit of solace in cheering for their favorite sports teams – it’s a welcome respite on a Sunday afternoon from what they have been facing every day since Sandy came ashore.


Life-long Steelers fan, Rianna Bryceland, is one of those who is looking forward to the match-up between her team and the New York Giants tomorrow afternoon: 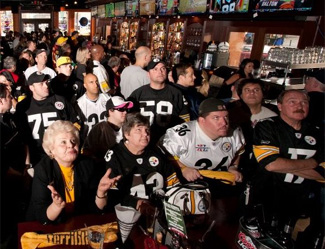 This morning I took a jog down the Hudson Riverbank with the intention of seeing with my own eyes the devastation Hurricane Sandy inflicted on Hoboken, NJ. Frankly, it’s worse than I imagined.

In case you didn’t know, Hoboken is heavily populated by citizens of Steeler Nation. (Eli Manning lives there too, but, hey.)

Anyway, since yinz’ll be playing the Giants here this Sunday, I thought it might be nice if a nod could be given to Hoboken’s staunch Steelers fans (shown in the photo sent by Rianna).

I am a lifelong Steeler fan who feels a great affinity for other uprooted fans from the ‘Burgh. All things considered, it might just give ’em a welcome lift.


Rianna, it’s our pleasure! God bless all that have been affected by Hurricane Sandy!


Both the NFL and the players pledged to donate $1 million dollars to the Red Cross for relief efforts.

You can donate to the Red Cross here. 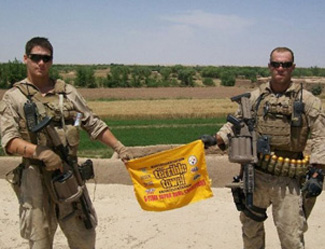 If you are active military or a veteran and would like to submit your Steelers fan photos to us, we’ll add the photo(s) to Ben’s Salute to our Military album.

The album is growing with photos from our soldiers in Afghanistan and Iraq, those stationed in South Korea, and closer to home here in the U.S.! We’d like it to grow even more!

One photo will be selected to highlight our Veterans Day post here on the home page next weekend.

Send your photo(s) to BigBen7website@gmail.com

Zac became Miami’s career passing leader with a 13-yard completion to Nick Harwell at the 5:34 mark of the third quarter of today’s game against Buffalo. He passed Ben, who tallied 10,829 yards from 2001-03.

Ben played in 38 career games for the RedHawks, while today marked Zac’s 43rd appearance over the last four years.

“I’m happy for him,” Ben said on October 10th, when Zac was within 584 yards of breaking his record. “Records are meant to be broken. I think that’s great. I’m excited for him to get that.”

You can check out all the spooky, fun, and adorable Halloween photos here!