“I pride myself, if we get the ball, whether we are up, down or maybe it’s tied, we want to go down and win the game. I want the ball in my hands. I always have the confidence in myself and the guys that we can do it. But sometimes younger guys, unless you’ve been here to do it, you are not really sure if it gets done as much as we talk about it.” — Ben, when asked about engineering his 25th career fourth-quarter comeback. 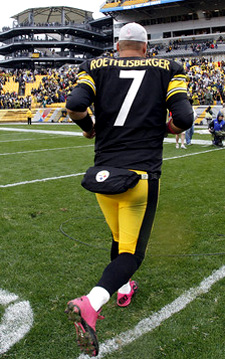 Backed up deep in their own territory, their slow start to the season in danger of turning into a legitimate freefall, the Pittsburgh Steelers did what they always seem to do when things get tight.

Ben Roethlisberger converted a pair of critical third downs during a remarkably patient 64-yard drive over the final 6:33 and Shaun Suisham drilled a 34-yard field goal as time expired to lift the Steelers to a 16-14 victory over the Philadelphia Eagles in the rain on Sunday.

Roethlisberger completed 21 of 37 passes for 207 yards, and Mendenhall finished with 81 rushing yards and a score while adding 20 receiving yards as Pittsburgh’s beleaguered running game showed signs of life.

“Our savior is back,” Roethlisberger joked. “We’ve been teasing him all week. It was great to see him out there and he did a great job.”

Heath Miller had four receptions for 43 yards to become the eighth player in franchise history to top 4,000 career receiving yards.

“Ben Roethlisberger is amazing…It’s really amazing what he can do and do under duress!” — Michael Strahan, NFL FOX Sunday. 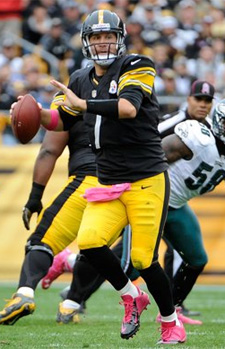 If you’re the Pittsburgh Steelers, this is what you like about your latest victory: Quarterback Ben Roethlisberger is still Ben Roethlisberger, rescuing the club with another fourth-quarter comeback, just as he has so many times before.

No wonder Tomlin said he was “thankful” for the come-from-behind 16-14 defeat of the Philadelphia Eagles, a club with a habit this season of overcoming opponents in the fourth quarter. But not this time and not against this team because … well, because there’s only one Ben Roethlisberger, and few quarterbacks make as many big plays in big games as Big Ben.

While Suisham will be hailed as the hero, the difference for Pittsburgh — again — was Roethlisberger.

He played his best when his team needed it most, and stop me if you’ve heard this before.

“I think all of the guys you can make an argument for being franchise quarterbacks — that’s the common tie that binds them,” Tomlin said. “They come in different forms, shapes and sizes and skill sets if you will — some of them are pocket passers; some of them are mobile — but the reality is that if they’re in that discussion it’s because they deliver when it’s time to deliver. No question, I don’t care whom you’re talking to, he’s in the discussion.”

He doesn’t have to convince me. I’ve seen the guy deliver winning throws or lead winning drives too many times. In fact, if I had one game to win, Roethlisberger is one of the two or three quarterbacks I would choose — with New England’s Tom Brady another. The guy simply excels when he must.

And on Sunday he had to.

“Their DBs are good, they’re all over you, and there are some really small windows. It’s a frustrating day when you get a great defense, because you want to do so much, and there are plays you feel you’ve left out there.” — Ben, on the Eagles defense.