“Nothing but smiles for this young fan”

Home/News/“Nothing but smiles for this young fan”
Previous Next

“Nothing but smiles for this young fan”

A Make-A-Wish moment on Friday for a big fan – 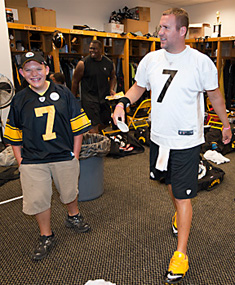 Alex Wagner couldn’t stop smiling, and his parents even laughed at the fact that he was actually giddy, something out of character for the normally serious 14-year old. But Wagner had good reason for being that way. What kid wouldn’t be smiling if they were a guest at Steelers’ practice and getting ready to meet the team?

Wagner, who has hypothalmic disorder, was at practice courtesy of the team and Make-A-Wish Foundation and will attend Sunday’s game against the Eagles at Heinz Field.

When practice ended, things got even better as the players all made their way over to Wagner, talking to him, posing for pictures and signing autographs. Ben Roethlisberger took him into the locker room, and then off to his production meeting with Fox Sports where he met Troy Aikman, who is in town for the game.


You can read more (and see some great photos) here.