…for bass with Merril Hoge! 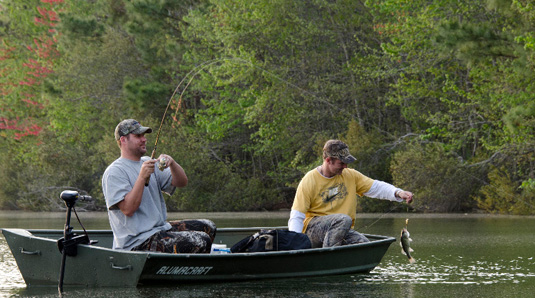 Ben and Merril released every fish they caught, and stopped counting after they caught 50 (at least that’s their story!).

Where’d they fish? It’s a secret….any good fisherman will tell you that you never divulge the location of your best fishing spots!

Ben’s friends Nick Sampson and Lonnie Price were “on location” as well, but were also sworn to secrecy as to the location.

Nick is a producer, and Lonnie is a photographer – their most recent work can be seen on the popular hunting show “Primal Instinct” on Versus TV. As you may recall, Ben was a guest hunter on the show last year, and the group got together for a goose hunt recently in Hershey, PA.


You can see more photos from their fishing trip here.


You can check out Nick’s website, Quest for the Continent productions here.

You can keep up with Nick (and check out more photos) on Facebook here.

Jessica Duffaut reads a lot of letters requesting grants from the Ben Roethlisberger Foundation for police, fire and other service canines, but none like the one from a Tarentum fire company.

Duffaut works for California-based The Giving Back Fund which is the administrator for the Roethlisberger Foundation.

The letter in question came from Ember, a Dalmatian who keeps watch on the Eureka Fire Rescue station on Third Avenue — with a little help from her friends, firefighter/paramedics Shannon McKruit and Susan Clark.

“This is my third year of reading applications for the Ben Roethlisberger Foundation and theirs was far and away the most creative I’ve read,” said Duffaut. “It was a treat to read.”

“I think just the whole perspective was refreshing,” she said. “It did take me a second to realize that Ember was the dog.”

It was creative enough to easily win over the screening committee and land a $1,000 grant to help feed and care for Ember.

“I just thought it would be more creative coming from her than coming from us,” McKruit said.