Below are a few excerpts from the article, written by Jim Corbett: 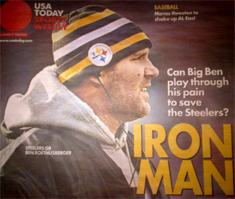 “It’s truly magical,” Roethlisberger says of being a father. “The place was 15 minutes from my parents’ home, so it was another chance for them to see their first grandson. He’s awesome.”

If Ben Jr. were old enough to talk, he might use that same word, as his Pittsburgh Steelers teammates do to describe his dad’s pain threshold. The day after the family excursion, Ben Jr.’s dad was back on his team’s South Side practice field continuing another Roethlisberger family tradition. This is the time of year Roethlisberger does what he does best – play through pain in a bid to salvage his team’s season.

“Ben brings a dominance to our team nobody else can,” receiver Mike Wallace says. “We have to win every game from here on out…When Ben’s playing, he gives this team that big old boost, because he’s one of the top five quarterbacks in the game.”

It was fitting that Pittsburgh’s biggest gun’s return coincided with the practice return of Baltimore Ravens leader Ray Lewis from a torn triceps suffered October 14th. Roethlisberger and Lewis had a heart-to-heart talk about both missing the fierce Baltimore-Pittsburgh rivalry for the first time during their careers.

“Ray came up to me before the game, and we had a long conversation on the field,” he said. “I have a lot of respect for that guy. I gave him a hug, and Ray goes, ‘Who would have ever thought that this game neither one of us would play?’ I said, ‘I know. It’s not the same.’ It was acknowledging the admiration we have for each other. It’s great to see him back out there too!”

Despite the ugly San Diego loss, the Steelers hold the sixth and final AFC seed and own the tiebreaker over the 7-6 Cincinnati Bengals, whom they host on December 23rd.

The Steelers have a healthy, motivated Roethlisberger carrying a chip on his Kevlar-padded shoulder….


USA Today Sports Weekly is available wherever newspapers are sold. The article is not available for online reading.