It was a ‘writer’s cramp’ kind of weekend

It was a ‘writer’s cramp’ kind of weekend

at Steelers training camp, but Big Ben didn’t mind at all!


“It’s fun. You know, it kind of takes you back to a high school kind of feel — obviously the high school field and all that stuff. But it’s fun to be able to come out and do this every year.” — Ben, during night practice on Friday at Latrobe Memorial Stadium. 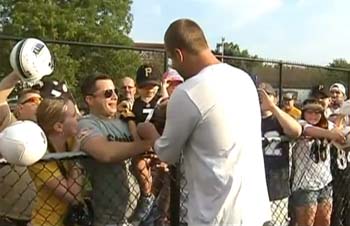 The Steelers practiced under the lights Friday night as thousands of fans filled Latrobe Memorial Stadium in Latrobe.

Friday’s night practice allowed more than 7,000 fans from near and far to get an up-close look at the current team.

The annual event also allows fans the opportunity to get autographs from players.

Jay Golnoski came to Latrobe from Baltimore. His son received an autograph from Ben Roethlisberger.

“My little guy here has got his Ben jersey on, and Ben came right to him and signed his shirt,” said Golnoski. “Perfect day. Worth the trip.”


You can read more and see video from Friday’s practice here.


A few more photos from the weekend: 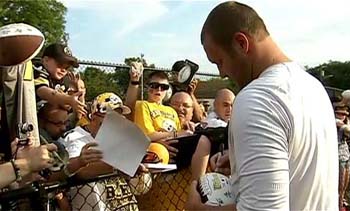 Nicole White @cole413
Got my autograph!! Thanks @_BigBen7 for being awesome!! #SteelersTrainingCamp 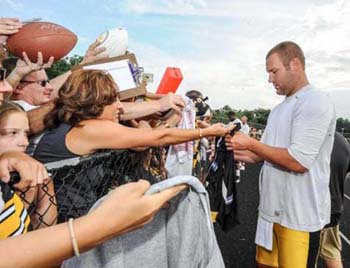 “Ben made my 9 year old sons summer when he signed his football Friday night. Thank you Ben for giving so much time and attention to all of the kids.” — Michele Reynolds Rush (via Facebook) 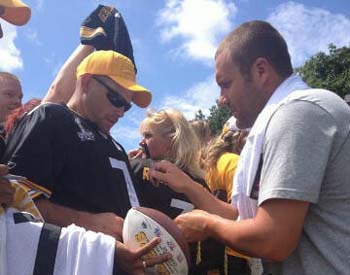 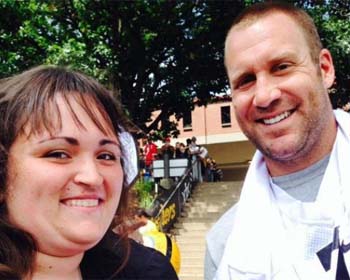 You can see more here!