News, notes & thanks from camp

Home/News/News, notes & thanks from camp
Previous Next

News, notes & thanks from camp

From Scott Brown today at ESPN.com:

I have long thought that Ben Roethlisberger doesn’t quite get his due as an elite quarterback from a national perspective.

One of only three active quarterbacks to win multiple Super Bowls, there is also documented evidence of how good Roethlisberger is under another kind of pressure.

Roethlisberger
Over the past three seasons Roethlisberger has been the best quarterback in the NFL when his pass protection breaks down.

Roethlisberger leads all quarterbacks in completion percentage (51.8), passing yards (1,837) and passing touchdowns (18) when throwing under duress or getting hit since 2011, according to ESPN Stats & Information.

You can also watch video of a different kind of QB competition that took place at camp here.

“Ben likes what he sees from Bryant”

Quarterback Ben Roethlisberger likes what he has seen from receiver Martavis Bryant, but knows there still has to be a lot of growth from the rookie before the season starts.

“He’s shown a couple plays recently that are very encouraging, but he’s got a long way to go,” said Roethlisberger. “He’s a young guy but he shows the interest and the desire to want to be great and to learn and so we hope he just keeps doing that.” 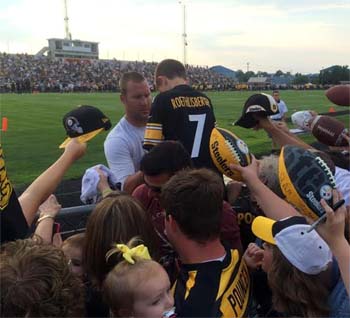 “Huge shout out to Big Ben for taking the time to sign my Big Ben’s jersey – you made his year!” — Tom Richards


“Thanks for signing our stuff!!! We came from Hawaii to see training camp and you were the highlight!!! Mahalo!!” — Michael Foster


You can see all the photos from camp here.