Home/News/“It’s a Pittsburgh thing”
Previous Next

The two men faced off across the table at Rep 1 Sports in Irvine, California last week, while visiting their agent, Ryan Tollner. Rep 1 tweeted a photo of the friendly competitors:

And speaking of NFL Draft Prospects…

“…in between visiting with Jared [Goff] and Carson [Wentz], I also had the privilege of throwing with Ben Roethlisberger of the Steelers. Big Ben’s reputation speaks for itself, and it was clear from the start that his success over the past 13 seasons is a result of the seriousness he brings to the practice field. When it’s time to work, it’s time to work, and I really respect that in a quarterback.

Ben’s goal, from the second he steps on the field, is maximizing his work. He knows exactly what he wants and how he wants it done. He’s been slinging the football for a long time now and he’s seen everything. He’s worked with every kind of receiver, and he’s thrown every route imaginable. 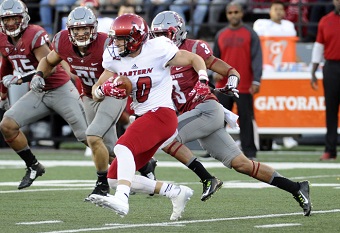 He’s also seen the issues guys have, and it would have been a mistake if I didn’t try to absorb as much as I could about what makes the NFL’s most successful receivers so good at what they do.

It’s clear that there’s more to being a good pro than simply being talented and productive in college.

For starters, in the NFL every route is a little deeper. The 15-yard bench route you ran in college is now a 20-yard route in the pros, so timing is absolutely critical. Fortunately, when you’re working with a passer like Ben, you can always count on his timing being perfect. It’s not just, ‘I’ll hit you in the chest.’ It’s, ‘I’ll hit you in the chest, off your seventh step, every time.’ And as a receiver, that consistency makes things easy. You know when you turn your head that the ball is going to be where it’s been every time.”


Best of luck & success to both of these young men as they prepare to enter the NFL Draft!