From Teresa Varley at Steelers.com today: 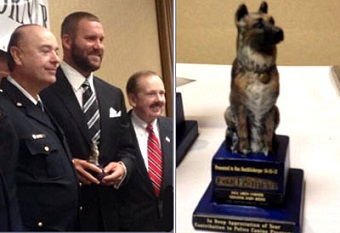 But what they don’t often get to see are those tender moments when Roethlisberger is at his best, making kids smile, bringing happiness to a sick child who through the Make-A-Wish Foundation wants to meet the Steelers and Roethlisberger in particular.

He also has a soft spot in his heart for those that protect and serve the community, in particular the K9 units as his love for animals has grown into a passion for helping law enforcement through the Ben Roethlisberger Foundation.

Each year Roethlisberger provides a grant to a law enforcement agency or fire department in the Pittsburgh area, as well as to one in the cities where the Steelers play. The grant is to be used for the K9 units, bomb sniffing dogs or rescue dogs.

“I don’t think the service people get enough recognition and credit for the things that they do and the tireless efforts that they put in,” said Roethlisberger. “If I can do just a little bit to help them, then I am happy about that.”

The foundation, which started awarding the grants in 2007, has donated in excess of $1.2 million. He was honored by the Amen Corner last year at Senator John Heinz Law Enforcement Awards Luncheon, becoming the first non-law enforcement individual to be honored by the organization, receiving an award for his contribution to K9 units of police and fire departments in the Pittsburgh area and throughout the country (photo above).

Last year the loss of K9 Rocco, who died from injuries in a stabbing attack, struck the Pittsburgh community hard. Roethlisberger knew he had to do something to give back, and the foundation purchased a new dog, Beny, for Officer Phil Lerza, Rocco’s handler. 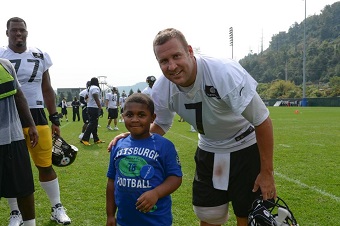 Roethlisberger’s other passion is the Make-A-Wish Foundation. He never hesitates when it comes to spending time with wish recipients, enjoying quiet moments with the kids after practice and always bringing laughter to even some shy, timid kids.

“He understands it, he gets it,” said Leigh Ann Lubarsky, Senior Manager of Program Services at Make-A-Wish in Pittsburgh. “He knows of all things this kid could have wished for, he wished to come there and meet him. He takes that time out of his day and that’s everything to a wish kid. He gets that. He is able to put everything aside and comes out to see the kids and is so approachable and jovial. Sometimes he will pretend he is not Ben, and the kids are so in awe.

“There is that moment you can see he connects with that kid. It’s so profound. When he is standing there he almost can’t believe the kid is that awestruck because it’s just him. It’s so special. For a kid to stand there and be like, ‘Ben is coming,’ that is so exciting. That moment is going to live forever with that family and it’s great.”

Lubarsky said some of the best moments are after the visit has ended and they are headed back to their hotel, that the child realized what just happened.

“That’s when it really hits them it happened,” said Lubarsky. “They are so excited. It’s so in the moment. When we sit down and on the way back there is that exhale moment and it really sinks in. It’s always he is so much taller than we ever thought, and they can’t believe how nice he is, how down to earth. People build the team up and in their mind they are a football player. They have no idea what their personality is going to be like. They are so surprised he is as funny and approachable as he is. They are like I can’t believe I just met Ben, and did you hear what he said.

“Every moment he spends with them they talk about and relive it. It’s a precious memory for them. Then they call family and relive it again. He then becomes more of a personal connection, and not just the football player they wanted to meet.”

Roethlisberger’s connection to Make-A-Wish doesn’t stop there. He has a rare relationship where not only is he someone who is able to grant a wish, but he helps wishes come true with donations from his foundation. The foundation began a yearly grant two years ago and so far has provided $55,000 to help make wishes come true.

“He has the unique perspective of granting wishes that have nothing to do with him,” said Lubarsky. “I don’t know how else to say it other than he is a double threat. He has impacted kids by meeting them and providing the funding. We don’t always see that.

“I am so thankful that we are a recipient of a grant from his foundation, but I am most excited that he is growing the relationship with us and it’s mostly about the wish recipients for him.”

Did you miss The Ben Roethlisberger Show yesterday?


You can read the recap & listen to the audio of his entire show here.

And since it’s Wednesday –

That means Ben was surrounded by the media in the locker room after practice!


You can watch Ben’s interview here!