“I think one drive we went 140 yards, we kept going back and forth and back and forth. It’s not good enough because we have to score points. Field goals aren’t good enough. Luckily our defense bailed us out.” — Ben, during his post-game interview. 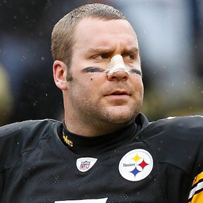 From the Toronto Sun:

Troy Polamalu and LaMarr Woodley both returned Carson Palmer interceptions for touchdowns to carry the Pittsburgh Steelers over the downtrodden Cincinnati Bengals, 23-7, in a battle between the best and worst of the AFC North at Heinz Field.

The Steelers (10-3) maintained the top spot in the division despite not scoring an offensive TD, as their defense held the bottom-dwelling Bengals to 190 total yards en route to a fourth straight victory.

Ben Roethlisberger, playing with a bandage around the nose he broke in last week’s critical win over Baltimore, connected on 21-of-33 throws for 258 yards, 115 of which went to Hines Ward on eight hookups.

On the next series, Ben Roethlisberger shook off another blow to the head — and another non-call by the crew of referee Walt Coleman — to lead the Steelers to a 23-yard Suisham field goal.

Defensive end Michael Johnson hit Roethlisberger — playing with a face shield on to protect his broken nose — in the head as he sacked him for a two-yard loss early in that drive. The quarterback and his coach, Mike Tomlin, complained to no avail.

Ben Roethlisberger completed 21-of-33 passes for 258 yards with no touchdowns or interceptions in Sunday’s win over the Bengals.

Steady rain and wind prevented Roethlisberger from looking downfield. Instead, he peppered old reliable Hines Ward with passes over the middle, consistently moving the chains and relying on his defense. Big Ben did appear to aggravate his right foot/ankle injury in the fourth quarter, but played through it while hobbling. 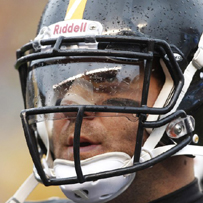 “It was raining. We talked to you guys earlier in the week and that was going to be a factor. That two-minute drive going down there, it was really starting to get wet. And, every time I hit the ground, it made it harder to see. So, we just took it off and went with a different kind of facemask to hope I wouldn’t get hit.” — Ben, on why he played without the visor in the second half.

“It’s terrible, man. I think they protect all of the quarterbacks but ours. But we’re going to keep on fighting, we’re going to keep on going. Hopefully they’ll catch it one day…we see the hits that Ben takes every week. It’s kind of ridiculous that they always miss those calls, but any time we breathe on a quarterback, they always seem to find that one.” — James Farrior.


“I’m proud of the guys and the way we played today. We scored two touchdowns. Most of the time when that happens, you’re going to win the game.” — Brett Keisel.

You can read more post-game quotes from the players here.

You can watch video highlights here.

You can check out photos here.

Also, check out this photo of Ben and Ryan Clark posing with Chad Ochocinco, posted on Chad’s Facebook page! (Thanks Becky!)