“The Pittsburgh Steelers were a good team under Bill Cowher, but they didn’t become a great one until Roethlisberger got there.”— Darin Gantt, from his commentary below.

From the Charlotte Observer‘s Darin Gantt this afternoon on the Panthers and the 2011 draft: 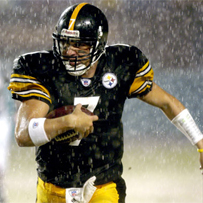 This is not just another Andrew Luck column. This one’s more about how Ben Roethlisberger could make Marty Hurney change his mind, perhaps one of the hardest things to do in Charlotte.

For years, the Carolina Panthers general manager was firm in the belief that quarterbacks were important, but ultimately fungible.

But you sense that Hurney’s beginning to sway, and the last two seasons are influencing him. Tonight should be the thing that pushes him over the edge.

From 1992 to 2003, the Steelers won 115 games, an average of 9.6 per year. They went to the playoffs eight times. They won no titles. They got close with defense, and running, and often despite quarterbacks Neil O’Donnell, Mike Tomczak, Kordell Stewart and Tommy Maddox.

The 2004 draft brought Roethlisberger, but the veteran coach wanted to stick with a veteran passer. It took both Maddox and Charlie Batch getting hurt to get Roethlisberger on the field, but once he got there, the Steelers took off. They won every game he started in the regular season. The next year, they won the Super Bowl. Three years later, another one.

It happened so fast, Roethlisberger didn’t have time to freak out.

“I didn’t have any time to anticipate that I was going to play that early,” Roethlisberger said. “I don’t know if that was good because I couldn’t think about it that much.”

The Panthers have to find their guy, and they might have to bend their own rules to do so.


*Thank you to Anita Doddroe for the heads-up!