Make it a Steelers Halloween!

Home/News/Make it a Steelers Halloween!
Previous Next

Make it a Steelers Halloween! 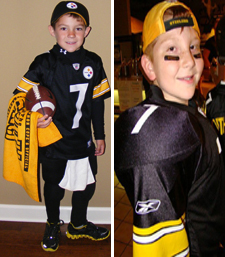 If you have a Big Ben going out for Halloween or attending a costume party this year and you’d like to send us their photo, we’d love to post it in Ben’s Lil’ Fans album, just like we did last year.

That’s Garrett Cagle and Zac Godfrey at left getting ready to head out for Halloween, 2011!

Now what if your Trick or Treater is going as Brett Keisel or James Harrison, Troy Polamalu or maybe Heath Miller?

Snap a photo of ’em, send it via email and we’ll post it in Ben’s Lil’ Teammates album!

The Trick or Treaters were out in force at the Roethlisberger house last year! 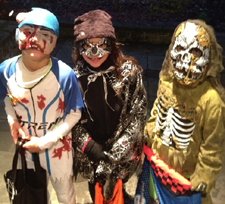 Ben and Ashley were busy handing out candy and snapping photos to share of just a few of the scary, the spooky, the funny, the pretty, and the down right cute kids that showed up at their door last Halloween!

They were showing up at the door as fast as Ben was sending the photos!

You can see their collection of photos in Ben’s album here (bottom of page 3 & top of page 4).

*If you would like to share a photo of your Lil’ Ben fan or Lil’ Teammate this Halloween, send it in an email to: bigben7website@gmail.com