Ben: “We definitely want to get back on track”

Home/News/Ben: “We definitely want to get back on track”
Previous Next

Ben: “We definitely want to get back on track”

“I think it’s great. It’s a great boost for the defense because they’re out there. The defense just kind of feeds off those guys as leaders. Offensively, it’s going to be great to see them out there, to see that hair blowing in the wind as he’s running around making tackles is a neat thing.” — Ben, on the return of Troy Polamalu and James Harrison

Highlights from Ben’s talk with the media today about Sunday’s game against the Philadelphia Eagles: 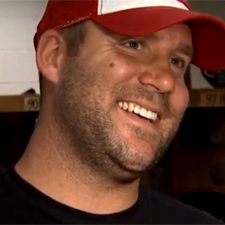 What problems does the Eagles defense present?

I hate to say problem. I like to say challenge. The challenge is for the tackles, the tight ends, and the line in general. If we can protect in the pass game, I think that’s big for us because we can take advantage of our wide receivers and our tight ends down the field. In the run game, taking advantage of those guys really being more speed guys, hopefully we can use some strength and power to move them.


When you are scoring a lot of points, does it matter if they come via the run or the pass?

You want to win the game however you can win the game, truthfully. We always say we want to score points so we have to keep scoring points, score more, and bring the running game as we go.


Re: The importance of this game, even though it is not a divisional or conference game:

We definitely want to get back on track. But, in just talking to the Philly media, it’s probably just as much Pittsburgh versus Philadelphia. Ever since I’ve been here, like you said it’s not a division game, it’s AFC versus NFC, but no matter what sport it is it seems to be Pittsburgh versus Philly and a general hatred. That’s what I’ve noticed since I moved here about Philadelphia. I think it’s just as much that, too.


Re: Pittsburgh versus Philadelphia in other sports:

I’m always rooting for the Pittsburgh team. There’s no doubt about that. I like to watch the fans boo the Flyers so I boo too (laughs).


You can read more from Teresa Varley’s Steelers.com Blog here.

You can watch the video of his interview here. 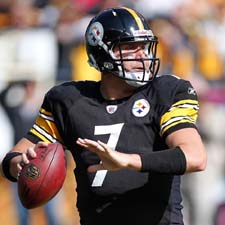 Steelers quarterback Ben Roethlisberger has always been a top echelon quarterback, and now he is putting up the numbers that go along with being an elite quarterback.

Roethlisberger is 2nd in QB rating; 2nd in interceptions thrown; 4th in TD passes; 5th in yards per game and 5th in completion percentage.

But that stat that is truly amazing is third-down passer rating. Roethlisberger has a 146.8 passer rating on third downs. — 28-of-37 for 374 yards and five touchdowns.


*From Mr. Kaboly via Sulia.com