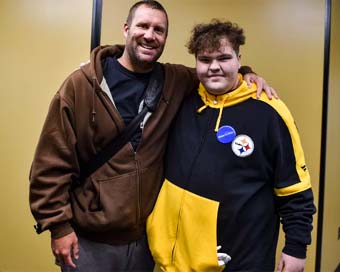 Friday was a day filled with smiles for Gabe Patton, a 16-year old from Vinton, Virginia who loves the Steelers.

Patton was a guest of the team at practice at the UPMC Rooney Sports Complex through the Make-A-Wish Foundation. He will also be at Sunday’s game against the Cleveland Browns at Heinz Field.

“I love the Steelers,” said Patton. “I have never been to an NFL game before. I have been to a few college games. I am really excited. It should be loud and a lot of fun.”

Patton, who is battling cancer, had the opportunity to meet his favorite players, including Ben Roethlisberger and Antonio Brown, while getting pictures and autographs.

“It’s crazy being here,” said Patton. “It’s surprising. It’s kind of crazy to see myself doing this. This is a big confidence boost. It gets all of the bad stuff out of my mind. It’s nice to do something fun that I never thought I would do.”


You can read more & see some great photos of Gabe’s day here.