“As men in general, we all need to show emotion. I think there’s a misconception out there that as men, we shouldn’t. I think that’s wrong. I think we should show emotion, whether it’s at a movie, if it’s funny or sad, if you want to be around your wife or girlfriend. Just because you cry doesn’t mean you’re less manly. I think that’s a false narrative. When it comes to football, if something hurts – [Derek Carr] might have been hurting, who knows? I know I’ve cried in the locker room before, for both joy and pain. You lose a football game, if you’re not showing emotion or if he gets up from something like that and he’s laughing, he’s going to get chastised for not showing enough emotion! So I don’t know exactly the story you’re talking about, but for me I don’t think it makes us any less manly to show emotion! — Ben, when asked if it was acceptable for football players to cry (after a story broke about the Raiders’ Derek Carr crying on the football field).”

“I’m excited for him to really get a push, and be even more involved than he has been.” — Ben, on James Conner’s role.

Did you miss Ben’s interview earlier today? No problem, Teresa Varley has the rest of the recap right here: 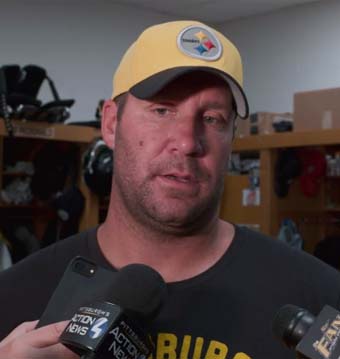 “Any time you turn the ball over you get disappointed. It was one of those games. Whether it was elements, them making plays, us not making plays.

A lot of factors involved. At the end of the day they made the plays and made us turn the ball over.

“They made the plays, we didn’t the first time around. Credit them, they’re a good defense.

We said going into that game they might be the best we play all year, and we’ll still say that.”


On the success of the Browns’ defense contributing to the turnovers –

“It’s a couple of things. It starts with the pass rush. Obviously, Myles [Garrett] is one of the best in the business. He is long, he gets after the quarterback, gets good jumps on the snap. In the secondary they catch the ball. We always joke defenders play defense because they can’t catch, but they can catch the ball. They don’t just bat it down, they make plays.”


On the key to the game coming off their bye week –

“Trying to start fast. The last couple of weeks we have been doing that. We’ve been playing well offensively. We can’t take a half to get going. We have to get going early.”


More from Ben, including video of his interview can be found here.