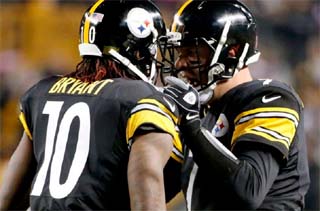 After serving a four-game suspension for violating the NFL’s substance abuse policy, not being activated for his first possible game back Bryant returned with a team-leading two touchdown catches and 168 yards from six receptions in the Steelers’ 25-13 win over the Arizona Cardinals on Sunday.

Mere weeks ago he had been crying, talking to Ben Roethlisberger after the quarterback heard Bryant was going to Houston for rehab and training. Roethlisberger was the Steelers’ healthy, starting quarterback then and Bryant could do nothing to help his team on the field.

Roethlisberger’s celebrations were restricted to the sideline on Sunday. There, he continues to recover from a sprained MCL and bone bruise.

Bryant and Roethlisberger shared a similar emotional, though sadder moment when Roethlisberger talked to the second-year receiver after learning he was going to rehab.

Said Bryant: “I started crying and everything because it meant a lot for me for him to come out and show me that he cares.”

Did you miss Ben’s radio show this morning?

No problem, you can read the recap and listen to audio excerpts here!