Home/News/Wednesday in Texas
Previous Next

“For me, yes, because it would be for Flozell. I want to do it for him. I think it’d be awesome. I know that Steelers fans and people are a little extra excited because of the old traditions and rivalries and the teams, but for me it’s about trying to win for Flo at Cowboys Stadium.” — Ben, on why winning the Super Bowl would be special for him. 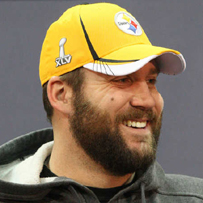 The Steelers practiced at TCU this morning and then Ben and other members of the team did another round with the media.

To see photos (and quotes from the presser) from both, click here.


NFL.com’s “Which QB would you rather have with game on the line?” here.

Quotes of the Day:
“There would be a lot of things. Those are two of the best quarterbacks in the league. They’re both excellent players; I had a chance to play against Ben this year and we played the Packers but Aaron unfortunately couldn’t play that day. From watching him on film quite a bit this season, he really had a remarkable season of his own. They’re two players who are really accurate passers, especially on the run. That’s something that is extremely hard to do, to make good decisions out of the pocket. I find that’s always challenging for me, when things don’t go like you practice them, what kind of decision-making can you use out there? I think both those guys, some of their strongest attributes are what they’re able to do when they’re moving around and buying time and allowing their guys more time to get open. Both guys really feed off that. They’re great players, and like I said, they’ve led their teams to this game and I’m happy for them both.” — Patriots quarterback Tom Brady, during a Q&A with ESPN.


“I texted him this week and said, ‘You already you already have two (Super Bowl rings), let me get my first this week.” — Aaron Rodgers on his message to Ben, during his press conference today.