while you wait for the game to start  – 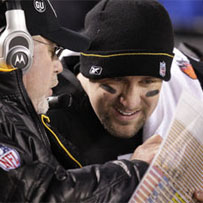 “I don’t think Ben liked me because I had coached Peyton,” Arians said of the Indianapolis Colts’ Peyton Manning, generally regarded as the hardest-working quarterback in the NFL. “I wanted to see him study harder. I wanted his work ethic to catch up with his passion for the game and all that talent he has.”

“He’s done everything and more that I’ve asked of him,” Arians said of Roethlisberger. “I’m as proud of him as you can be of a person who’s not your son or daughter.”

Their success together has been extraordinary. The Steelers went to the playoffs in ’07 and won the Super Bowl in ’08. They missed the playoffs with a 9-7 record last season despite having a 4,300-yard quarterback, a 1,000-yard rusher, two 1,000-yard wide receivers and a tight end who caught a franchise-record 76 passes.

There are no GQ stories, good looks or a super-model wife like Brady. Roethlisberger isn’t witty and funny like Manning. There are no memorable commercials to make us chuckle.

Roethlisberger is far from mainstream, but he is still good.

No, make that great.

There is nothing flashy about the way he plays the game. It’s easy to forget a guy that doesn’t routinely throw for 300 yards and three touchdowns. But Roethlisberger finds a way to get it done, just in a different way.

He is rugged looking. He is more boots and a plaid shirt than a three-piece suit corporate type. Roethlisberger is a 6-5 mountain that is tough to bring down and doesn’t mind getting bloodied a bit if it means carrying his team to a win.

And there have been plenty of those in his seven-year career, which includes a .693 regular season winning percentage, a 9-2 playoff mark through last week and two Super Bowl titles.

Check out this slide-show and story of the “Steelers man cave” where one Riverside family will be watching today’s game.

Quote of the Weekend:

“I’d take him on my side any day of the week, any time of the game, against anybody. I don’t believe anyone in their right mind who knows football has a negative thing to say about his work on the football field.” — HOF quarterback Joe Namath, on the quarterback his NY Jets will play against today.

Stat of the Weekend: