Whitfield on Ben: “He’ll be ready”

Home/News/Whitfield on Ben: “He’ll be ready”
Previous Next

Whitfield on Ben: “He’ll be ready”

From an article in the Pittsburgh Tribune-Review this morning written by Scott Brown: 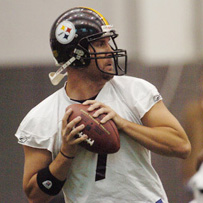 George Whitfield Jr. is well aware of the pressure that comes with his latest endeavor. But Whitfield looks at working with Steelers quarterback Ben Roethlisberger as the professional opportunity of a lifetime.

“I cannot wait for this four-week run to see how sharp I can get him by the time week five rolls around,” Whitfield said Wednesday. “He’ll be ready.”

Whitfield, 32, trains quarterbacks for a living — he is the owner of Whitfield Athletix in San Diego — and he first worked with Roethlisberger right after the 2009 season in Southern California.

Of their first day together, Whitfield recalled: “I don’t know how many guys like to throw in the rain, but he did it in a steady, driving rain for two hours. To him, it was much more than just going through drills. He wanted to know: ‘What did you notice here? What do you have in mind for this drill?’ I learned how dedicated this guy is.”

“We did talk to (Roethlisberger) about being out in Southern California, but he said right away: ‘I don’t want to go anywhere. I want to be right here in the city of Pittsburgh, near my teammates,’ ” Whitfield said.


You can read the entire article/interview with Mr. Whitfield here.