“One of the greatest catches in Super Bowl history”

“One of the greatest catches in Super Bowl history”

This is the third of three plays nominated as the most memorable play in team history. 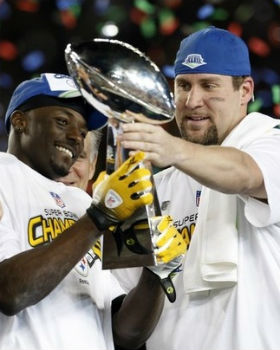 Ben Roethlisberger and Santonio Holmes played pitch and catch so effortlessly that it seemed as if they were in a backyard.

The two were, in fact, on one of sports’ biggest stages, and the Arizona Cardinals were powerless to stop them at the end of Super Bowl XLIII.

A Larry Fitzgerald 64-yard touchdown reception had given the upstart Cardinals a 23-20 lead with 2 minutes, 30 seconds left in the game. After a holding penalty moved the Steelers back to their own 12-yard line, Roethlisberger and Holmes went to work.

They connected three times in moving the Steelers to the Cardinals’ 6-yard line with less than a minute to play.

A first-down pass from Roethlisberger to Holmes in the back left corner of the end zone looked like it would give the Steelers the go-ahead touchdown. But a leaping Holmes could not hang on to the ball.

“When I threw it and it looked like he had it, I was celebrating and I just remember, ‘Oh man,’ but coming back to the huddle I was encouraging. He wasn’t down at all,” Roethlisberger said recently. “He was disappointed he didn’t catch it, but there was no worry about going to him on the next play.”

Roethlisberger did just that.

After eluding the Cardinals’ pass rush and going through his progression of reads, Roethlisberger spied Holmes in the opposite corner of the end zone where he had almost made the game-winning catch a play earlier.

Three Cardinals defensive backs were also in the area, but Roethlisberger threw the pass anyway.

“When it came off my hand, I thought the defender (cornerback Ralph Brown) in front was going to turn around,” Roethlisberger said. “I really thought it was intercepted when I let go of it, but it ended up just over his hand and where [Holmes] could make a play.”

Roethlisberger had thrown the ball where only Holmes could make a play on it. And Holmes turned in one of the greatest catches in Super Bowl history when he leaped for the ball and then got both feet inbounds by inches after pulling it in.


You can read more from Mr. Brown, and vote for what you think is the “most memorable play in Steelers’ history” here.