“My department received a grant from your foundation during the last NFL season to purchase a new K9 for our department. I was chosen to be assigned to the K-9 unit and be the dog’s handler. Let me start off by saying that I am extremely grateful and can not describe in words how thankful I am that our department was chosen for this grant.

K9 ‘Ajax’ and I will be completing our first training school (Narcotics Scent Detection) in approximately two weeks. Then in September we will be starting “Patrol School” together. K9 has always been a goal and a dream of mine and because of your foundation I was able to achieve it. Once again, thank you very much for your generosity and for choosing our department.” – Officer John G. Reuter, Fort Lee (NJ) Police Department, in an email to the website on March 27, 2014.

Police & Fire Departments: The Ben Roethlisberger Foundation at The Giving Back Fund grant guidelines for the 2014-2015 grant cycle – 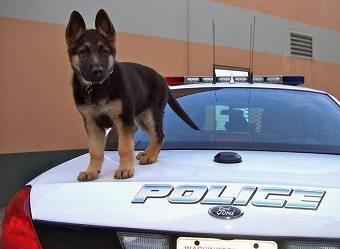 Ben’s foundation will be distributing grants in the cities and surrounding communities of each regular season away game for the Steelers during the 2014 NFL season.

He is inviting police and fire departments in these eight cities to submit proposals detailing their needs.

Eligible departments must apply to The Giving Back Fund by August 15, 2014.

And you can enjoy more photos in the Ben Roethlisberger Foundation album here.