Home/News/Post-game: Steelers vs Raiders
Previous Next


“There’s no offense, there’s no defense, there’s no special teams, we’re one! The defensive guys, the offense can take the blame…I know I’ve done it before too, but no one needs to shoulder this right now.” — Ben 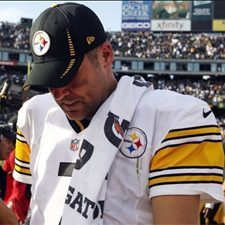 Ben Roethlisberger was limping across the locker room and his right knee was bleeding, too. It was another tough day at the office for Roethlisberger in the stadium that is quickly becoming one of his least favorite places to visit.

When he turned around to face reporters after washing away the blood and sweat from another head-scratching loss by the bay, one would have never known by the look on his face that Roethlisberger had just played one of the best statistical games of his career.