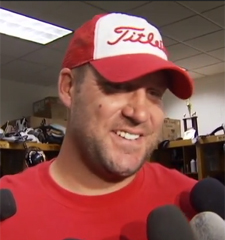 Watched it. Crazy game. Crazy ending. Glad I wasn’t a part of it.


On whether he thinks the “tie goes to the runner”, to the offense –

As an offensive player, sure (laughs). If I was on defense, no, but it’s tough. Like I’ve said, I’m glad that I wasn’t put in that situation.

I probably didn’t speak clearly enough. It wasn’t necessarily I called plays as much as I used signals…hand signals. I really didn’t think it would get blown up as much as it did, so I know some people are saying that I’ve been resistant to Todd. But it’s one of those things that we went to Todd, and it’s in the playbook now. It was simply a signal that I used with the receivers on two different occasions. One was on the fourth-and-one early, we got the ball to Mike. The other one was later on third down to Emmanuel. So, we converted on both plays so they worked out. The point of me saying that was [to answer the] question how everybody was on the same page [with] me using signals that we’ve had for a long time that weren’t necessarily in the offense, but they are now because they worked. So, it’s just good that we’re on the same page. That’s all.


On the early success of the no huddle –

Well, we work very hard at it. We put a lot of extra work in, me, the receivers, tight ends, the line, the coaches, and we ask a lot of questions and got a lot of answers. So, I think it’s just a lot of hard work paying off.


On whether he talks to former OC Bruce Arians –

We talk every week, and I mostly ask about Andrew [Luck], about how he’s doing. I’m always interested in the other quarterbacks in the league.


On how comfortable he is with the new offense –

The good thing is that we’re getting better with the hand signals. Not only did we have to learn new words (for the plays), but we had to put hand signals with everything too. So, that’s been tricky, but I think we’ve done a good job. And you have to give credit to the wide receivers, because they’re the ones who have had to learn all that stuff as well. And like I said, that’s why we reverted to old signals, because we all knew them and knew them for such a long time that on two different occasions, we used a simple signal, and they worked.

They were things that, if I had gone to Todd early and said, ‘hey let’s thing on this or do this’ he would have probably said, ‘Yeah.’ But the situation never arose so we never thought about it until it happened in the game. So it’s not like I was going against Coach Haley’s offense or the playbook (smiles), or anything like that, or resistant to change. It was just a simple little hand signal.


On whether he has a good relationship with Coach Haley –

Oh yeah, gosh. There’s no issues at all (laughs).


You can watch video of his interview for more here.


A few stats from Sunday –

• Ben’s 384 yards mark the seventh-most passing yards of his career and ninth-highest total in a single game in team history.

• For the second consecutive week, Ben completed at least one pass to 10 of the 12 active receivers on the Steelers offense (RB, FB, TE, WR).


You can read stats for the team here. 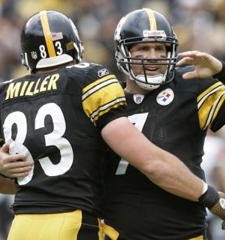 
– Da Beard aka Brett Keisel has his own NFL Films video!


– LaMarr Woodley officially launched The LaMarr Woodley Foundation this week. It is a nonprofit organization designed to help underprivileged children and adults in Pittsburgh and his hometown of Saginaw, Michigan.


– Ben was named Steelers Digest Player of the Week!