Pouncey on Ben: ‘He is a true leader’

Home/News/Pouncey on Ben: ‘He is a true leader’
Previous Next

Pouncey on Ben: ‘He is a true leader’ 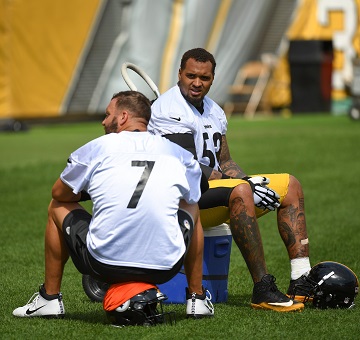 Whether it be a normal routine, the ability to move from a virtual world, or just spending time around friends and family, normalcy is something people are yearning for.

Maurkice Pouncey is no different.

“I like normalcy,” said Pouncey. “I understand right now the protocols that are going on. It was at first a real adjustment period, trying to get used to it. The older players want to come in and have their same routine. You have to understand the bigger picture. But I like normalcy.”

Pouncey did get his wish for normalcy in one area though. He has Ben Roethlisberger back. The two have been a tandem for the past 10 years, Pouncey protecting his quarterback at all times like his life depended on it. But last year, things were different. Roethlisberger was injured in Week 2 of the season and done for the year. Now, though, he is back and for Pouncey, that gives him the normalcy he craves.

“That is for the whole Steelers Nation, to see him back there, how comfortable he is, how motivated he is,” said Pouncey. “To watch his whole process, going through the surgery. To come back like this in Year 17, it’s been incredible to watch. I know injuries are hard, especially at this age. But he has been out there rocking. He is a true leader; a true soldier and I really appreciate the type of player he is. That is normalcy, for sure.”

Pouncey, who said he tore his meniscus last season but opted not to have offseason surgery, still has the excitement and energy as he heads into his 11th season in the NFL.

“For me personally it’s all about having fun and enjoying it,” said Pouncey. “For me contract isn’t an issue, years in the league isn’t an issue. Every day I am coming in and enjoying it. We have a good young group. The guys are still motivated. I feel like I could still do it at a very high level. Until somebody proves me otherwise, I will be playing.”