Big Ben completed 4 of 8 passes for 36 yards in this one, leading the Steelers to a field goal on his second possession.


“I thought the line did a good job opening the holes and the zone blocking that everyone has stressed. We wanted to establish an identity early of running the ball, and I think we did a good job.” — Ben, post-game.

News, Notes & Quotes from the first one: 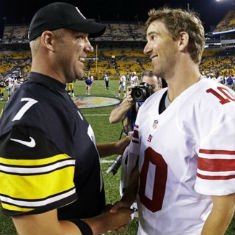 “Steelers take good with bad in preseason loss to Giants”

“There were some positives and some negatives,” coach Mike Tomlin said.

The good: Stephens-Howling, expected to be a situational back, ran seven times for 40 yards and led a 13-play drive late in the first quarter that ended with a Shaun Suisham 34-yard field goal. The starters wound up playing 18 plays, or one-third more than the 12 that Tomlin projected.

“He has great vision, and he got outside and made some plays,” center Maurkice Pouncey said of Stephens-Howling, a former Pitt player from Johnstown.

Even as the 5-foot-7 Stephens-Howling bounced those runs outside, the Steelers used their new zone-blocking system only twice during the starters’ nine running plays.

“We wanted to establish an identity early of running the ball, and I think I did a good job with that,” Ben Roethlisberger said.

Coach T: He didn’t take a delay of game. He used a timeout. I didn’t have any problem with Ben’s performance. He did a nice job communicating and executing the offense. Some things happened from a communication standpoint that kind of happen quite often this time of year. We’ll move past it. No worries there.