“My favorite memory from camp this year was watching Ben sit down in the end zone after practice and play with his son. I will never forget how special that moment was, to not only Ben, but for his fans as well.” — Carol Evans

Both big fans and Lil’ Fans have sent in their Thank You’s to Ben for spending time after practice to autograph their collectibles at Steelers training camp this summer.

Below are just a few of the messages that we have received: 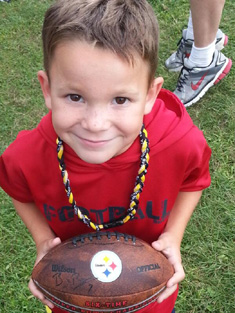 “My son, Jonny Evanchick is six years old. He was thrilled to get to see Ben up close and even more excited to get #7’s autograph on his new Steelers football. After he signed it he ran back to tell me the good news and insisted that we go back and buy another football because we can’t play with the signed one anymore.

He also forgot to ask Ben if he wanted his necklace. He was wearing one of those sports rope necklaces and thought it would help Ben on the field and wanted to offer it to him. I explained that maybe you’ll see him again some time and that I’m sure he’s already appreciative that you’re a supporter of him and the team.

Needless to say, my son is a big fan of Ben and made me play catch with him in the dark so he can emulate his favorite player. With the second football of course. Thank you once again.” — Jonathan Evanchick

Got to meet Big Ben at Steelers camp! Thanks for signing my wife’s football who happens to be a SFU grad just like Ashley! — Brian Lucas ‏via Twitter @TheBrianLucas

“Ben! You are THE MAN! Thanks for signing my jersey today! It was worth the wait!! Good luck this season!” — Dillon Spence

“Please tell Ben how much we appreciated the time he took to talk to our little one, who suddenly turned shy after hours of excitement at the idea of meeting Big Ben! LOL.” — Candice Johnson 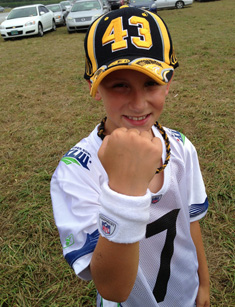 “Thanks Ben for making my son’s training camp visit so memorable! Ben threw his wristband to him today and he has not taken it off yet. My son Keiran is a quarterback and of course wears #7. He can’t wait to take the wristband to practice to show his teammates. Thanks again Ben!” — Jennifer Lippman


“Ben left the signing area with no shoes on yesterday. He gave them away while signing autographs for everyone, including our friend’s two children, and walked away with muddy socks! It was a sight to see! Thank you, Ben!” — Billie Jo Yakubik

“Steelers training camp is always so much fun to attend, but it’s even better when Big Ben signs your jersey and smiles big when you snap a photo of him, haha. Thank you Ben!!” — Lisa Strasser

“THANKS BEN FOR SIGNING MY SHIRT AND MY HUSBANDS FOOTBALL. BEST THING OF TRAINING CAMP FOR SURE!” — Jamie Harmon

“I was having a hard time pointing out to my granddaughter Ava which guy on the bench was Ben. I yelled over for him to wave to her so she would know it was him…and he did! Thanks Ben! Ava is only three, but she loved her first day at ‘Steelwer Camp’ and your wave just made it!” — Tami Kinser

“Just wanted to say that I feel really fortunate to have Big Ben at QB for my team! Great guy…watched him go all the way down the row, with his shoulder iced and his knee, signing for what seemed liked forever after practice yesterday.” — Donnie Patterson 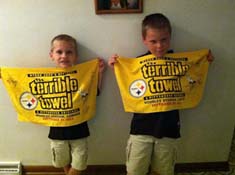 “Wanted to thank Big Ben for the autographs at Steelers camp! This was our 5th year at camp, my son Brandon is 5 and Brad is 7, and this was our first autographs! We were so excited. Thanks so much…Ben has made their entire year as well as mine…only wish I was able to get mine signed but seeing my sons faces was priceless! Here they are posing with their Terrible Towels, which are signed by Big Ben and Maurkice Pouncey. Thanks so much! If you can relay this along to Ben and tell him how much it really does mean to the kids and fans!” — Roni Kiesel

“We can’t thank Ben enough for taking the time to sign our football. He was so funny and kind, smiling the whole time, even though we knew he was hot and tired!” — Steve Taylor

Couldn’t go to training camp today because of med school, my dad brought me back the best present ever!! (a football autographed by #7) — Kaitlyn Blackburn ‏via Twitter @KaitlynBlackout

“Ben, just a quick note to thank you for making our first trip to camp memorable! I don’t even know how many things you signed, it seemed like you would wear out before you got to my son and I, but there you were, smiling and talking to the fans and signing away! Thanks again and have a great season!” — Edward Smitts 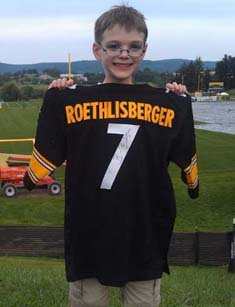 “For weeks, all I heard was, ‘Daddy, how many days until training camp?’. Selfishly, I was asking myself the same thing, now 33 and never having attended camp myself. I talked to some training camp “veterans” to get the scoop, but truthfully I had little idea what to expect. Armed with a few jerseys, a couple autograph footballs, and some sharpies, we made the 5-1/2 hour voyage to Latrobe. Jacoby was so eager to see all of the Steelers! He wanted to slap hands with all of them as they entered the field.

To cap off a great day of training camp, Jacoby got a bunch of signatures, one of which was from Ben! If you could have seen the look on Jacoby’s face when Ben walked over to us! I am truly blessed to be able to have shared this experience with my son. I couldn’t have asked for anything more. Thank you to the Steelers, and especially to #7 for making this such a memorable trip.” — Nick Bonnett, Glen Allen, VA

The comments on the site’s Facebook page even prompted a couple of fans to recount their past “signing stories”:


“I can remember Big Ben signing after practice at training camp, the crowd was crushing a little boy like 10 yrs old. Big Ben was like ‘Hey watch it! You guys a hurting him!”. He then took his shoe off and signed it and gave it to the little boy. I thought that was cool of him.” — Justin Stevenson


“Ben you are a class act! I watched Ben and the Steelers warm up before an Eagles vs Steelers game a few years back in Phil. PA. Two young kids cheered their hearts out to you all practice. I thought to myself, ‘How come you can’t at least wave or say Hi?’. But after practice, you went to the bench, signed two fotoballs and walked over and gave them to the two kids. I was very impressed. Keep up the great work!” — Jeff Taylor

And an update from Patrick Williams on his trip to camp with his daughter, Kathleen: 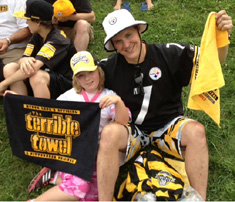 Patrick’s story about the loss of his young son was featured here on February 27, 2013.

“We went to St. Vincent three days…Friday for the night practice where Kathleen got lots of autographs; On Monday (8/5), I got Ben’s autograph on my son’s jersey. I told him it was my son’s favorite jersey and that he had passed away December 30th and had been featured on his site. He looked at me and said, ‘I am sorry. (Pause) I am really very sorry!’. It was very nice for him to acknowledge it all in the pandemonium that was surrounding him at the time.

On Wednesday (8/7), we went back with one of the kids’ ski instructors and three of their ski buddies. Kathleen and two of the kids got Ben’s autograph. Kathleen was beaming. I was amazed at how gracious Ben was… It had been a long practice and both his right elbow and left knee were heavily iced and he moved gingerly. In spite of this, he signed hundreds of autographs… It was a pretty impressive display.

My son, Connor had always wanted Ben’s autograph but never got it. I teared up after and felt like I accomplished something for him. That jersey will be framed with a plaque honoring my son in our basement, which is heavily laden with Steeler memorabilia.

Thank you, Mr. Roethlisberger for your sympathy. Thank you also for all the time you spent, in spite of being banged up, signing autographs. You made one little girl’s, and a couple of her buddies’ day.” — Sincerely, Patrick Williams