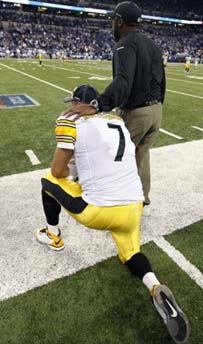 The Steelers could not run, quarterback Ben Roethlisberger could not hide and the Indianapolis Colts, heavy underdogs, kept things close Sunday night right up to the end.

In the very end, though, the Steelers pulled it out 23-20 when Shaun Suisham kicked a 38-yard field goal with four seconds left to end a 60-yard drive that began at their 20, and a wild finish over the final five minutes of the game.

Roethlisberger played a game part brilliant, part under siege. He threw for 364 yards, including 169 in the first quarter when the Steelers ran out to a 10-0 lead. But he also threw an interception and lost two fumbles, all in the second quarter that led to three Indy scores of 13 points.

“You have to bounce back. and have a short memory. It’s tough because on the sack/fumble you don’t see the guy coming. You say protect the ball, but when you don’t know a guy’s there, it’s kind of hard. Just have to take care of it. The pick, I had a guy open, but just overthrew him and that’s how it goes.” — Ben, post-game.

From George Bremer, the Indiana Herald-Bulletin:

In the end, the Indianapolis Colts simply ran out of miracles.

A wild prime-time showdown at Lucas Oil Stadium ended Sunday night with a 38-yard field goal from Shaun Suisham that gave the Steelers a 23-20 victory and dropped the Colts to 0-3.

Steelers linebacker James Harrison hit Colts backup quarterback Curtis Painter from the blind side early in the fourth, and Troy Polamalu returned the ensuing fumble for a touchdown that gave the Steelers a 20-13 lead.

Ben Roethlisberger, who completed 25-of-37 passes for 364 yards and one touchdown, led a frantic Steelers drive back down the field to win it.

“Our defense, they’re fun to watch. They make exciting plays when they need to, and I’m glad they’re on my side.” — Ben, post-game.

Roethlisberger lost his left tackle, right tackle and right guard in a game that was absolutely ragged. He took three sacks, and eluded 2-to-3 more. The Steelers appeared to be in for an easy night in the first quarter, driving to a field goal on their opening possession before Roethlisberger found Mike Wallace for an 81-yard score on their third.

That’s when things got wild, with three straight drives ending on Roethlisberger turnovers.

Unable to sustain anything in the second half, Big Ben finally got hot with two minutes remaining, racking up 50 yards as he put Pittsburgh in range for the game-winning field goal. He targeted six different receivers at least four times in going over 280 yards for the third straight game.

“We don’t care how it looks. We just want to get out of stadiums with wins, particularly road stadiums and AFC ones.” — Coach Tomlin, post-game.

Ben winning percentage (.700) is second only to New England’s Tom Brady (.769) among active signal-callers with at least 50 starts. (FOX Sports)