“There are so many bigger things going on around here that what we do is not as important as real life. My thoughts and prayers go out to everyone else who are going through so much. There were so many emotions going on, I didn’t know what to expect from it. But maybe we were able to take their minds off their problems just a little.” — Ben, post-game. 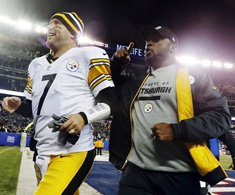 Sometimes, real life intrudes on the games we play. And sometimes, we need those games to get away from real life.

In the wake of Superstorm Sandy and the destruction it brought to the Northeast, everyone on the Pittsburgh Steelers and New York Giants understood that.

That’s all the local fans sought: temporary relief and the Giants (6-3) provided it for a while. But they couldn’t stop Isaac Redman, who had little relief with Pittsburgh’s other two main backs injured, yet rushed for a career-best 147 yards and the winning 1-yard TD with 4:02 to go.

The Steelers’ long day began with a plane ride to New Jersey, a short side trip to their team hotel — they couldn’t get enough rooms to stay in the area on Saturday night and needed a league travel waiver to arrive on game day — then on to the stadium. Outside, folks tailgated and tried to blunt some of the devastation from the week’s superstorm.


“Thanx for making my 7th nite of no power a lil’ easier to take by beating the Giants!!!!” — Steelers fan Jackie Lomba ‏(@JaxFromJersey) via the site’s Twitter page.

This is one of the oldest rivalries in the NFL, although the teams have met only five times in 18 years. It had to feel weird for the Giants to have the ballpark rock when the visitors took charge.

You can watch video of Ben’s and Coach Tomlin’s post-game news conferences here.

– Ben completed 21-of-30 passes for 216 yards, two touchdowns and an interception.

– Ben now has 22 career fourth-quarter comebacks with three for this season so far: vs Eagles, Bengals, and Giants.