During Ben’s interview with the media last night, he was asked if there was a special reason he held on to the game ball as he ran off the field. 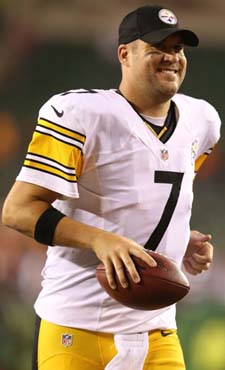 “That was the first time we’ve done the victory formation, I believe this year, to take a knee to end it, and I wanted to keep that. There’s a little boy that’s very sick that has been on my website, and has been checking in…and I want to send that to him.”


The little boy is 7-year old Richard Culliver, a BIG Steelers fan who is having the fight of his life with an inoperable brain tumor. He was featured in a story here last week.

His mom, Stephanie said he would be thrilled with the gift.

If you didn’t get a chance to read Richard’s great adventure at a recent Steelers game, you can do so here.

Richard’s parents took him to St. Judes Hospital a week and a half ago for testing and treatment. However, at this stage there isn’t much that can be done. He had surgery last Friday which included the placement of a shunt to alleviate some of the pressure and fluid in his brain. He has been sleeping quite a bit, but he and his family are still finding time to do many fun things, and taking exciting day trips together!

Please continue to keep Richard and his family in your thoughts and prayers.


— The Augusta SteelMasters fan club is doing a donation drive here. You can also check out their Facebook page here.

— Cristalena Potvinis, the family friend who alerted us to Richard’s story, is also doing a fundraiser with her business – every dollar raised by purchases will be matched by her and given to the family. You can view her site here.

— Cristalena is also selling gray (for Brain Cancer Awareness) rubber bracelets. Each bracelet has the words, “Richard-God Loves You and NEGU” (Never Ever Give Up) in support of Richard and his fight.

The bracelets will also help his family with his mounting medical bills. They are $3. per bracelet (which includes shipping).

Please make sure you email her with your name, mailing address, the quantity of bracelets you want, and your form of payment to richardsjourney@yahoo.com.

Once you get your bracelet, Cristalena asks that you take a photo of yourself wearing it to share on Richard’s Facebook page so he can see the support he has out there from Steeler Nation!