Steelers Preview: The Greatness of Ben

Home/News/Steelers Preview: The Greatness of Ben
Previous Next

Steelers Preview: The Greatness of Ben

Mike Prisuta @DVEMike
Snapshot from St. Vincent: Ben Roethlisberger seems to be enjoying his time on the practice field during camp. 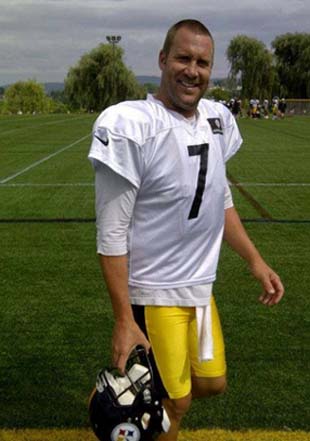 Over the years, football fans have pretty much agreed on which top-tier veteran quarterbacks fall on which tier. The first tier generally includes, in no particular order, Peyton Manning, Tom Brady, Aaron Rodgers and Drew Brees. The second tier: Philip Rivers, Eli Manning, Joe Flacco and Matt Ryan. And then there are the talented but inconsistent gunslingers who float from one tier to another, guys like Tony Romo, Matthew Stafford and Jay Cutler.

The star quarterback people can’t seem to firmly slot is Ben Roethlisberger. Fans all agree he belongs on one of these tiers. In fact, he seems to fit on all three.

The truth is, Roethlisberger belongs on that first tier. He’s 2-1 in Super Bowls, has a career winning percentage of .669 as a starter and, most importantly, his on-field performance verifies his on-paper accomplishments.

Roethlisberger doesn’t quite look it, but upon close examination he’s one the most physically gifted quarterbacks in football—if not the most physically gifted. His ability to shed would-be sackers is one thing; his ability to do it multiple times and then gather himself enough to make not only a downfield throw, but a sharp and accurate downfield throw, is otherworldly. His unconventional playing style can make his golden arm easy to overlook.

While he’s always been great out of structure, Roethlisberger in recent years has also become very good within structure. The 32-year-old will never be a full-field progression read passer—he has too much natural inclination to improvise. But he’s no longer heavily dependent on his freestyling, thanks to improved awareness in the pre-snap phase.

Roethlisberger now operates in a Todd Haley scheme that emphasizes pre-snap decision making. Examples include Pittsburgh’s expanded shifts and motions, plus the quick receiver screens that have become a staple.

Roethlisberger’s relationship with Haley has been highly scrutinized, though both insist they’re on the same page now. Which is one reason we can expect the Steelers to rebound from a second consecutive eight-loss season. Some believe Roethlisberger actually had the best season of his career in 2013. If this club is to become a Super Bowl contender in 2014, he’ll need to be even better.